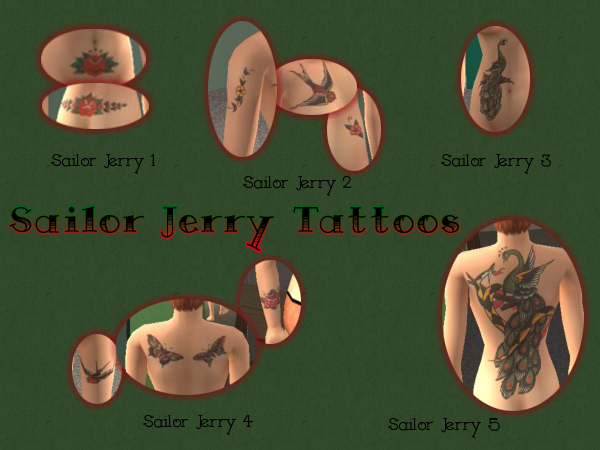 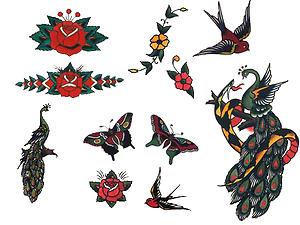 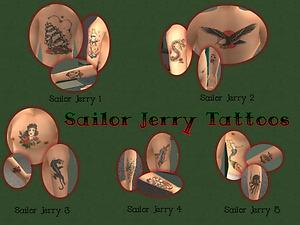 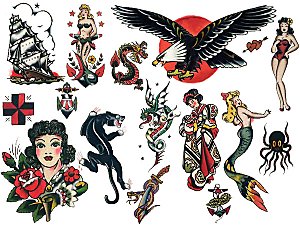 1,787 Thanks  Thanks     159 Favourited
Picked Upload! This is a picked upload! It showcases some of the best talent and creativity available on MTS and in the community.
They don't go missing when you change into your shorts!! They don't even run in the shower!!
Here are my next tattoo overlays based on Morague's terrific object. These are much more fun than my last ones, 'cause I got to choose the tattoos, rather than sticking to the Maxis stuff. So, I chose tattoos from vintage flash by a famous tattoo artist, Sailor Jerry. They are very traditional tattoos, in traditional colors (lots of red, green, and black), so I made them sort of faded out, so they looked, well, old-school! Because of this, they are sort of hard to see in my screen shots, so I included some more detailed pics of the flash. I tried to make these combinable, by putting the tattoos in each set on just one side of the body. So, for example, your male sim can wear sets 1 & 3 at the same time, and have tattoos on his back, chest, right and left bicep, and right and left forearm. The complete sets are pictured and described below.

Male sets:
Set 1 is a large ship back piece, a mermaid and anchor on the right bicep, and an anchor with a shield on the right forearm.
Set 2 includes a large eagle over a sun on the upper back, a brunette pin-up girl on the right forearm, an oriental dragon on the right bicep, and two little hearts with an arrow through them on the butt!
Set 3 has a large portrait piece on the chest (called the Cape Horn Lady), a panther on the left bicep, and a square cross on the left forearm.
Set 4 includes a snake and dagger on the left bicep, a geisha on the left forearm, and a winged oriental dragon on the left calf.
Set 5 is a (different) mermaid on the left ribs, an anchor with a rope on the back of the left forearm, and an octopus on the right calf.
Just a few notes, for those unfamiliar with these kinds of overlays. Morague based her original object on the sunburn overlay that came with the Seasons EP, so you must have it for this to work. It will appear to be a crate in the Misc./misc. section of your catalog. Clicking on it will give you a pie menu, with options to add or remove set 1, 2, 3, etc. You will experience a short lag the first time you use the object, so don't panic. And, go thank the original Morague object; she made all this possible!