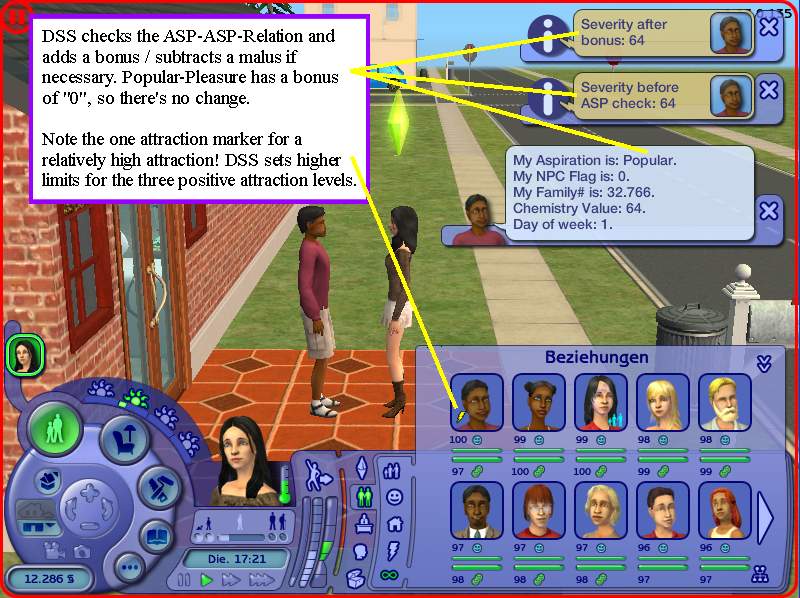 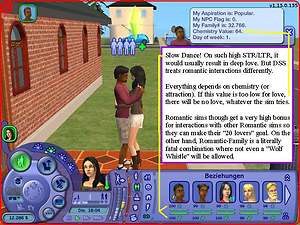 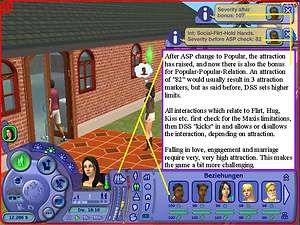 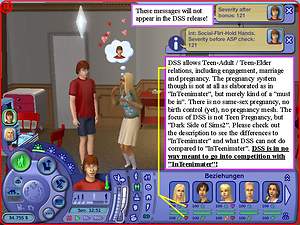 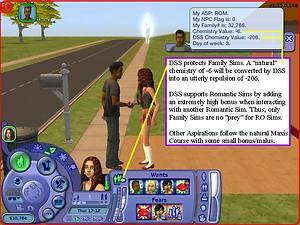 1,121 Thanks  Thanks     213 Favourited
Picked Upload! This is a picked upload! It showcases some of the best talent and creativity available on MTS and in the community.

(Edit: This text was re-written because the first description led to misunderstandings due to my not-so-good english)

Sims Relation Manager (SRM) and Teen-Adult Manager (TAM) are finished so far and included in this alpha release. The main component DSS will follow as soon as these two components are mostly bug free.

Now what exactly do these components?

a) SRM (Sims Relation Manager) takes care that all romantic interactions like flirt, kiss, hug etc. can only take place if the chemistry (attraction) between two sims is high enough. A "Wolf Whistle" requires low attraction, while "Woohoo", "Marry" and "Have Baby" demand a very high attraction. Two sims with low attraction to each other cannot fall in love, even if they flirt or exchange a romantic kiss. To check whether the attraction is high enough, the in-built "DSS-Spy" can be used. A detailed listing of the seven new attraction levels can be found in the enclosed "DSS Manual", which covers just the basics for now and will be completed with the ongoing project.

b) TAM (Teen-Adult Manager) allows teen woohoo, teen-adult and teen-elder relations, teen pregnancy, home birth and teaching the later toddler to walk, speak etc. As it was suggested in this thread, these teen-adult options can be turned off and on individually for each lot. By default, they are all turned off. Though the whole "DSS" is meant to make the game more realistic, more challenging and to bring in a lot more problems and catastrophes, I decided to implement these "switches" because 1.) depending on education, culture, religion and/or other factors, teen-adult relations might be offensive or even illegal in some countries, and 2.) to let the player decide to which extent the realism shall go in this point.

These two components are quite complete by now, and I hereby ask the community to test this alpha as excessive as possible, because this is a task I cannot do on my own. It will simply cost too much time, and it would take me probably months to test every single aspect.

c) DSS itself exists yet only as ideas in a text file and waits to be programmed. This component is designed to add the most realism into the game, like breaking kitchen counters, breaking sofas and beds that are used too intensively, power outages during thunderstorms, accidents on the way to work / school, random physical attacks by mean sims and wolves and dogs, slower job promotion, and even unpredictable deaths of sims / pets in all age groups. Since "The Sims 2" introduced aging and death at a certain age, I found it only fair to add a (very) small chance of death through other opportunities.

The bad news: Since the whole package of DSS with its three components modifies a big amount of resources, DSS is likely to conflict with many already existing hacks. It will not be compatible with hacks like "Teen Woohoo" or "InTeenimater". It will not be compatible with age controllers, visitor controllers, LifeTime Wants hacks, phone hacks, job and school hacks. All of these (and some more) are already included or will be programmed with the ongoing project. The reason for this is: All components interact with each other, like gearwheels in a clock. The three main components will come as a single package, but not as modules, since modules would require that I write several versions of each and every resource. As a short example: When two sims sit on a sofa and want to cuddle, at first "The Sims 2" does all necessary tests if this interaction is possible, and if yes, my SRM checks the attraction value, my TAM checks for same or different ages, and my DSS will check if the sofa is about to break when the sims "Make Out" during cuddling. It is simply too much work to set it up as modules, and it is not designed to be that way. I accepted the criticism about teen-adult and teen-elder relations, and I converted this into the described configuration options. But I cannot split the three components and create three different modules. All three components very often use the same resources and therefore must be combined into one single package.

If you don't like the idea of having so many hacks in one single pack, search for other hacks

MTS2 is full of good hacks, while my DSS is just an offer to those player who think the original game is too easy or too boring with its fast falling-in-love behavior.

"DSS" supports (or will support) all Expansion Packs through separate "AddOn's". These are included in the .RAR file and will also be updated and extended with the ongoing project. Right now, "DSS" includes:
- DSS-Configurator, to allow/disallow teen woohoo, teen-adult relations, teen-elder relations
- DSS-Spy to check other sim's aspiration and attraction value
- Age Controller for sims (pets to follow)
- SimRefresher (takes care of all the motives that drain too fast and sends babies, toddlers and children to bed at 9pm, letting them sleep the whole night)
- Lifetime Wants Extension, for a wider range of possible LTW per aspiration
- CtfG's Garden mods, Homework mods
- an improved Compost Bin, based on CtfG's mod and following some suggestions in that thread
- Tending harvestable plants, pulling weeds and trimming bushes creates invisible "trash" on the sim and can be deposited in the new compost bin.
- Slightly improved crafting times for all crafting stations from OfB and FT, and almost completely new crafting costs which allow to run a profitable business (needs testing, especially the very fast crafting times when employees work at a station)
- Modified school times for children (their school day ends at noon, one hour before teens come home)
- Sims can sell aspiration points. 10.000 points = §1,000. Available from a sim's pie menu, "DSS..."
- Reduced bonus on job promotion (new salary plus 10% only, no longer new salary x3)
- Re-written "Show Hidden Skills" from CtfG now shows also Badge progress
And a few other things I can't remember right now. A full list will be included later in the manual.

It is higly recommended to start a completely new neighborhood after installing DSS. For instance: the married adults "Jocque" from FreeTime were not able to kiss because of low attraction. Only after resetting their zodiac signs and turn-on's they finally behaved like married sims and had all the pie menu options one would expect. To avoid these problems, it is best to create a new neighborhood and set up all user-sims as needed. Please consider before you install DSS that this neighborhood might get lost with a later version of DSS! For this alpha test, if possible focus on a) the romantic interactions and their existence / absence in relation to the attraction value, and b) on teen-adult / teen-elder relations including teen pregnancy. My test sims had all in all five babies, but that doesn't mean that it will work always.

Besides of this, the existing DSS version can be used as a mod that redefines the romantic behavior as stated above. If you are happy enough with this and do not need any catastrophes in your game, feel free to use this mod and post your experiences here. This will also help to find out what is wrong, what could be improved, and what is working.

As usual with pre-release versions, I will collect all problems and fix them bit by bit. Post here if you find errors, bugs, problems, wrong values, or if you have suggestions. When this alpha test for the components SRM and TAM is done, I will start with the DSS itself. Right now, after a) updating all of CtfG's mods and b) setting up and coding DSS, I'm a bit tired and need a few days for myself, though I'll check here at least once a day. I just want to see something different than the SimPE screen for now

Thank you in advance for participating, and good luck to all your sims!


Additional Credits:
CtfG, who has left TheSims2, for his work on all the mods I included here with his approval.