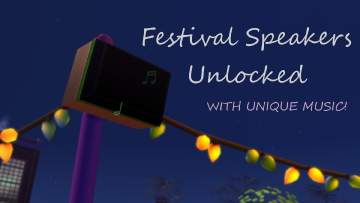 UPDATE: Now the speakers properly consume power like all other speakers, also you can now dance to them, cheers!

Have you ever noticed that the music playing during festivals can't be found in any of the game's stations? It comes from special speakers that only spawn there, and each of them has a few flavor tracks (not enough to make them into a fully fledged stations, that's why they're not available for player use).

I haven't found any other mod that unlocked them (or any acknowledgement of their existence anywhere online, really), and I thought it was a real shame that we got several asian-themed tracks, among others, that we couldn't use for ourselves. (I mean you could play the J-rock station in a traditional asian-styled lot if you want, but uhh.... yeah)

The 5 speakers play different music according to the theme of the festival, which are:
By Maxis design their volume is a bit lower in comparison to the other stereos, most likely not to overwhelm the player with music in festivals, so I recommend placing more than one close to each other (if you don't want to fill up your wall with them just make them smaller with the scaling hotkey and place them inside another object with the moveobjects cheat :D)

I've overridden the original objects and added thumbnails + separate descriptions to differentiate them, since they all use the same model just with a different color.


Additional Credits:
Made with Sims4Studio

Need more information?
Back to download view
13 Comments / Replies (Who?)