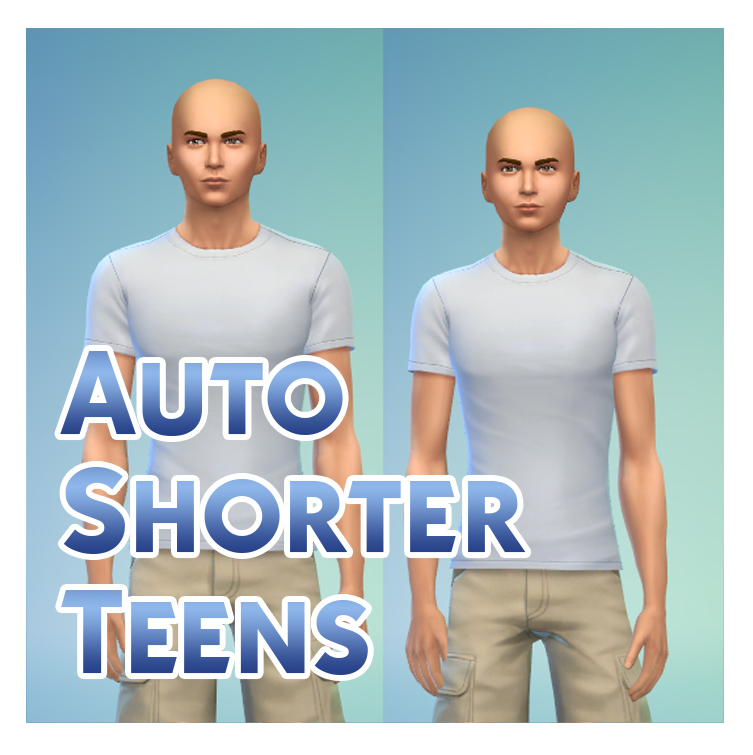 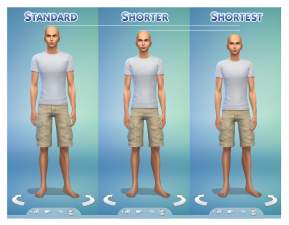 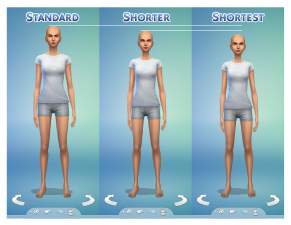 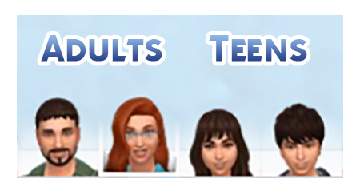 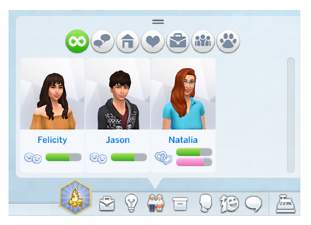 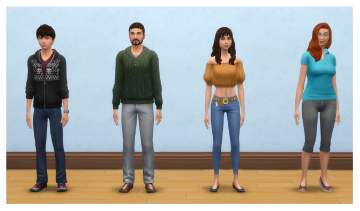 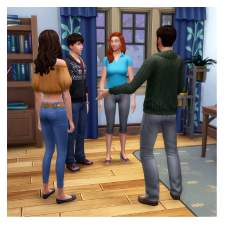 171,764 Downloads 2,190 Thanks  Thanks 643 Favourited 236,445 Views
Featured Upload!   This is a featured upload! It showcases the best talent and creativity available on MTS and in the community.

Created by Menaceman44
View Policy / About Me View all Downloads
Uploaded: 16th May 2020 at 3:23 PM
Updated: 13th Jul 2022 at 7:49 PM - Werewolf compatibility
Description
This has been a long time coming.
Ever since the announcement of The Sims 4 and the realisation that Teens would be the same height as Adults I have hoped and dreamed that it would one day be possible to shorten them down with mods.

Mods were created to address this and I was overjoyed but then patches would break them only for them to never be updated.
Fantastic sliders were created to alter the heights of Sims but it all had to be done manually and then reset once a Sim aged past the Teen stage.

I wanted something that would work automatically on all Teens in the game whether played or not and return them to normal height once they passed the Teen stage.
Today I bring you just that!

Info
This mod is an amalgamation of my own work and that of several other wonderful creators used with their permission.
I would very much like to thank simmythesim for the initial early work into height sliders and a shorter Teen mod.
Luumia whos height sliders the modifiers in this mod come from.
NiveaSimsCC whos bone delta values were added to Luumia's modifiers to tweak the result more to my liking.
And CmarNYC for piecing together how to obtain the Instance values required to make this mod work.
Without the help of these wonderful creators I would not have been able to bring this to you today.

So, onto the details.
First of all this is NOT a slider or a body preset.
This mod overrides the Teen specific CAS Modifier Tuning XMLs for each of the occult types and adds in a new reference to the short height modifier.
This means that any Sim that is created as a Teen in CAS, or ages up to a Teen through normal gameplay will automatically be shorter than Adult Sims. It also means that once they age past the Teen stage they will return to the default height for an Adult Sim.
You don't need to do anything different to have this mod take affect on newly created or aged Teens.

It is important to note, however, that already existing Teens will NOT automatically become shorter upon installing this mod. There is a way around this though.
Open the cheat console and enter the cas.fulleditmode cheat. Now take the existing Teen Sim into CAS either through a mirror, dresser, or other method. Once in CAS you need to change either the Sim's frame or gender and then switch back for the shorter height to be applied. You can then exit CAS.

I haven't noticed any oddities when Teens interact with or carry Toddlers or small pets.
A useful side effect of this mod makes it easier to identify Teens from the Relationships and Household Members panels as their pictures will appear lower in the frame when compared to Adults.

I hope you all enjoy your (mostly) automatically shorter Teens!

Notes
As with all height related mods there will be some clipping of animations and certain interactions between Sims of different heights may not align correctly. Correcting those is outside the scope of this mod although I have tried to use values that reduce this.
Teens and Young Adults uploaded to the Gallery will be flagged as containing CC. Pointed out to me by Spiderses. I forgot to check Gallery usage.
This mod is, as far as I am aware and have tested, compatible with other height slider mods. This means you can alter the individual heights of Sims still, including Teens, if you like with the use of other CC sliders.
When creating a Sim and selecting a new body preset for a Teen they may reset to Adult height. To fix this simply swap their gender and then swap back again. Swapping frames does not work in this situation.
On one occassion during testing, after editing a pre-existing Teen their left hand went missing after exiting CAS. After a few minutes of in-game time the hand returned on its own.
If you use Khitsule's pointy ears unlocker then make sure to choose one of the "PlusEarsUnlocker" versions.
This mod also corrects an EA error where the tuning for Teen Spellcasters incorrectly classifies them as Vampires instead.

This mod overrides the following resources and will conflict with any other mod that also does so:

The mod will conflict with CaS Modifiers bugfix: Aging & Randomization by Shimrod101 although that mod may no longer work anyway since the other modifiers used in it seem to have been removed from the game files.
It will also conflict with Pointy Ears Unlocked - All Ages by Khitsune. If you use this, make sure to download the "PlusEarsUnlocker" version instead and place the file in an Override folder.
Also conflicts with CAS Mod: Presets Selection for Randomized Sims by SimplyAnjuta. Specifically the file for altering the body presets of Sims. The brows, beards, and skintone files are still safe to use.

13th July 2022
A small update to reflect changes made to the Young Adult tuning with the Werewolves patch. Sadly, due to the way the Sims Team have set up the tuning this time, it is not possible to make Teens shorter while in their wolf form. They should still be shorter while in human form though.

12th March 2021
In an attempt to address the issue where Teens will not get taller when aging to Young Adults for some players, I have recreated the mod with fresh tuning and now included the Young Adult modifier tunings with minor alterations as well.

26th May 2020
Thanks to the feedback from cedrigo I have made it so that Teens necks will now scale down to better suit the smaller propotions. This will affect all Sims as there are no seperate modifiers for the different gender options.
DClick mentioned that this mod conflicts with Khitsule's Pointy Ears Unlocker and so I have added a new version which should mean you can keep both files in your game and still have access to the pointy ears modifiers for Teens.
Lastly, FullMetalAlchemist requested a version that uses the same height as NiveaSimsCC's Teen Preset. There are two versions of this. One with the pointed ears unlocked and one without.
If you spot anything iffy please let me know. I had to edit a lot of numerical values for all the new versions and my eyes might have missed something.