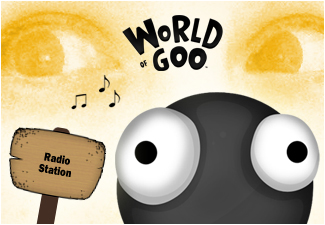 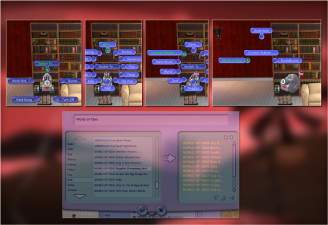 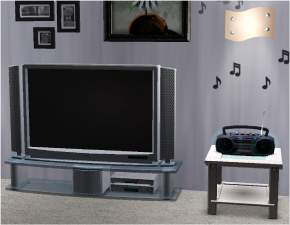 World of Goo is a puzzle video game developed and published by independent game developer 2D Boy. The game was released on Microsoft Windows and Wii platforms on October 13, 2008, with releases on Nintendo Switch, Mac OS X, Linux, and various mobile devices in subsequent years. A physics-based puzzler, World of Goo has the player use small balls of goo to create bridges and similar structures over chasms and obstacles to help other goo balls reach a goal point, with the challenge to use as few goo balls as possible to build this structure.

The game was nominated for numerous awards—the Seumas McNally Grand Prize, Design Innovation Award, and Technical Excellence—at the Independent Games Festival, and has gone on to win several other gaming awards. The game was critically acclaimed and became an example of a commercially successful indie game.

WORLD OF GOO'S MUSIC
FOR YOUR SIM HOUSES

WHAT IS IT?
It's a new radio station. It's a Global Mod which adds new stuff to your game.

USEFULNESS
It will be useful to you if you're a fan of World of Goo or if you like great videogame music.

ESSENTIAL RESOURCES ONLY
You get the music, the playlist and the folders to place it correctly. Isn't that great?

MOD FUNCTION
Well, it's a new Custom Radio Station. You and your sims get new music to listen to.

MOD TYPE
My mod adds new content to the game. It doesn't conflict with anything. Even if you made other Custom Radio stations before, it won't erase them, it will add a new one to them.

4 EYES ON THAT THUMBNAIL???
Well it is me behind that Goo, with my eyes looking like two of those yellow ones that get many spikes and can fling the others out of the water. Don't know what I am talking about? Try the game, lol.

From World of Goo

And 3 more from their other games :

LITTLE INFERNO
- Over the Smokestacks, Over the City


INSTRUCTIONS
How to install your new Radio Station

1) Pick the group(s) of songs you are interested in

2) Unzip the zips! Put the folder which was in the zips in your My Documents folder. It contains an EA Games folder which should be put where your current one is.

3) Your computer should ask if you wish to MERGE both folders - SAY YES. By saying yes, your computer will copy the songs in the proper place in your Sims 2/Music folder.

4) If you download many zips, your computer will ask if you wish to overwrite a file called customstation.xml - SAY YES, this is the playlist. It will add the custom radio station to your game. If you install all the playlists of this set on top of each other, it doesn't matter because they all contain the same information. If, for any reason, you lose the playlist, and don't know how to make it again, redownload it and place it in your My Documents folder again.

5) IT'S READY! You can now hear your new WORLD OF GOO radio station either in the Audio settings or - better! - from a sim's radio.

6) The playlist goes by the order in which those musics are heard while playing World of Goo. If you downloaded them all, World of Goo's opening theme music will be the first one.

** Note : If you download my other radio stations after this one, their playlists contain all necessary information to work fine with this set.

*** Sorry if you don't have Freetime!
I tried MTS's tutorial on making radio stations compatible with the Basegame but it didn't work. Fortunately, Freetime still makes this possible.

CREDITS
All credits to Kyle Gabler and the other creators of World of Goo (2008). Here's the links to get to know him and his other amazing work!

DO NOT REDISTRIBUTE ANY OF THE MUSIC!! It is high quality copyrighted material. I had permission (forever ago! lol, in 2018) from Kyle Gabler to use his pretty songs for this set. Please understand and respect him and his amazing work!