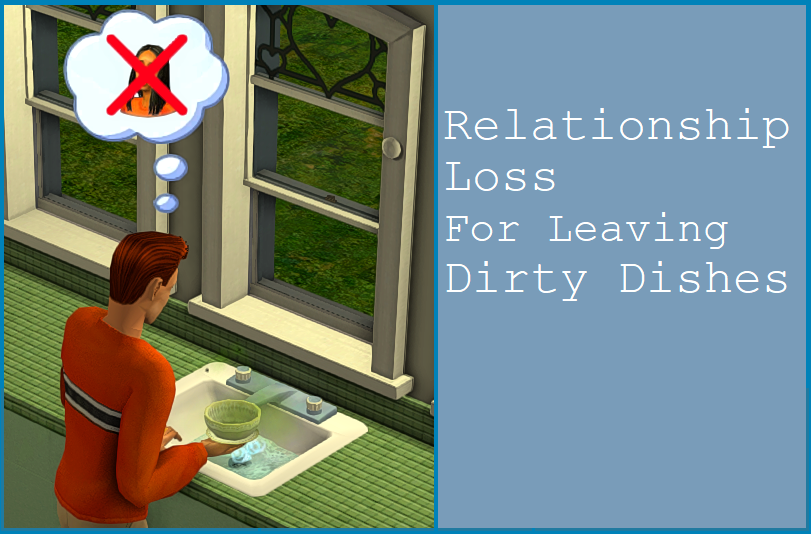 About
This is a fun little mod the idea for which came to me as I happened to be cleaning up the common area kitchen - I thought to myself that it would be entertaining if Sims could gripe about their messy roommates, and then I would feel vindicated, watching them toil away at the kitchen sink.

There are two new archives with patches for CBOY's and Simler's conflicting mods. Please ensure you adhere to the load order outlined in the 'Mod Conflict' section below.

So, What Is This Mod, Exactly?
When installed, you will notice some differences when your Sims wash plates and bowls. These occur under the following conditions:

• The dish washer is not a Maid or Butler.

When these conditions are met, if the Sim is washing a single dish, they will display a thought bubble of that dish's Sim with an 'X', as well as a relationship loss effect. The Sim will lose X STR with the Sim that left the plate. (X = 3 by default). 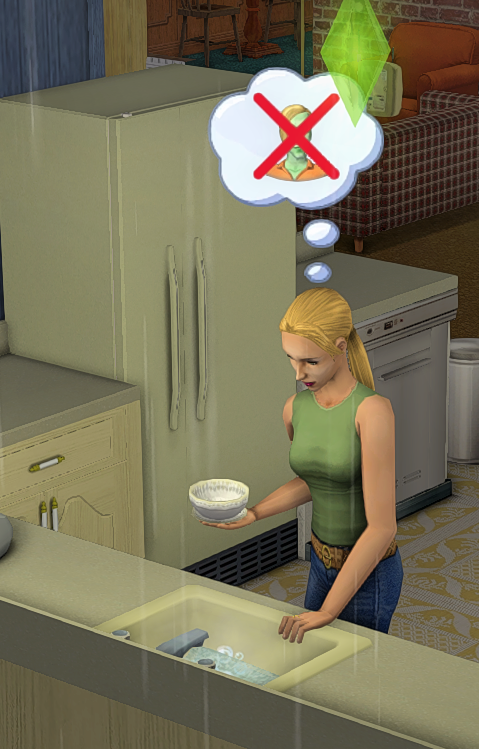 If the Sim is washing a stack of dishes, the Sim will not display a thought bubble, but will instead lose a greater amount of STR (X + Y, Y = 2 by default) with every Sim contributing to the dish stack. As a consequence of how I implemented this, the effect will be cumulative if a single Sim has multiple dirty dishes in a stack. This creates incentive for the player to purchase a washing machine, or ensure each Sim takes care of their own mess. 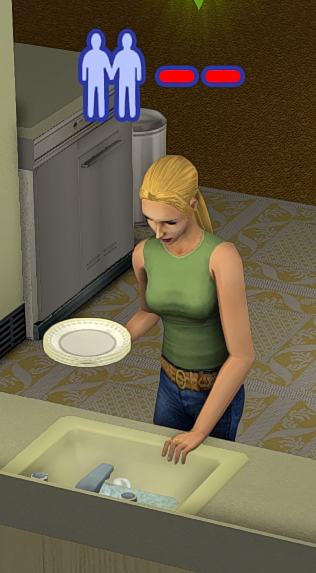 An additional, optional package is included; 'bstuDishWashingNotAutonomous.package' disables autonomous dish washing in most cases, making your Sims more prone to leaving stuff about.

Sidenote, if multiple Sims ate from one plate/bowl for some reason, the Sim that took the most bites will get blamed.

0x0: This is a field used for debugging. All this does is make pop-ups appear, so there's no point in enabling it.
0x1: This determines whether a dish needs to have gone stinky with flies to make a Sim lose STR when cleaning it. On by default.
0x2: The amount (X) added to the STR of the washer to the dish's owner. Since this is a negative value, it is subtracted from the relationship. (-3 by default.)
0x3: The amount (Y) added to (X) if the washer is washing multiple dishes at once. (-2 by default.)
0x4: This determines the amount of Neat points the washer needs to have in order to lose STR. This is 0 by default, because I think even Sloppy Sims would be annoyed to clean up after others! This is in multiples of a 100, so 1 Neat point = 100.

Mod Conflicts
• CBOY's Eat More Talk Less. If you have this mod, it's outdated for Freetime. It will also cause this mod not to function. In order for it to function, you need to have:

• Simler's WashDishMods. Having these installed will nullify this mod unless you have the patch. You need to have:

This is fairly simple, just builds a relationship between the eating Sim and the dish which is then checked and worked with.
Other Information

Title: I am $Object number $Local:0

Title: I am $Object number $Local:0