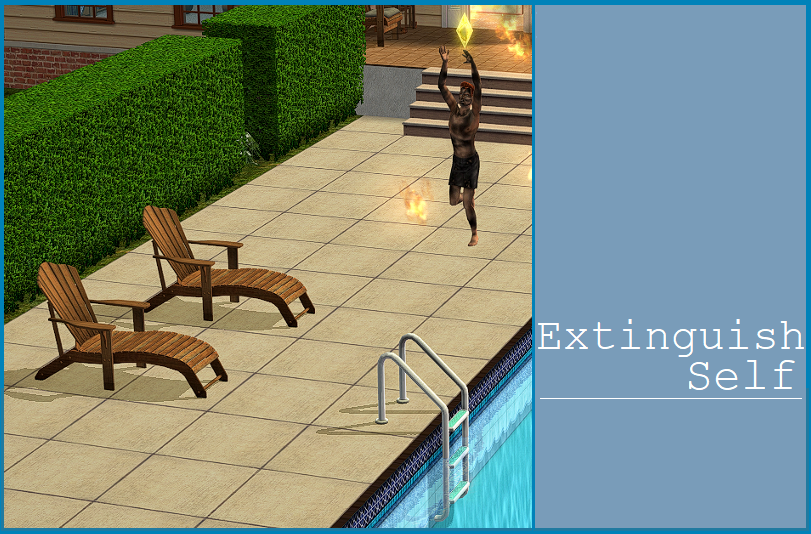 Update 17/05/22: A patch for Ankyoume's Pool Spots is no longer in the works.
Edit 31/12/21: Newest version now incorporates the fix from Cyjon's Fireproof Toddlers. This mod does not require Smarter EP check.

About
It feels good to get back to my roots with a solid mod that isn't just a global override! This is another later game feature that I enjoy and wanted to port back to The Sims 2. With this mod, Sims are able to extinguish themselves in a swimming pool when they are on fire, no longer dooming flaming singles to inevitable immolation.

Installation
This mod comes in four .packages and you need all four for the mod to work.

So, What Is This Mod, Exactly?
When Sims are on fire, doing the whole fanning self and writhing routine, they will have access to a new nested Pie Menu Interaction when clicking on the pool. All Sims who can die from fire can also attempt to extinguish themselves. 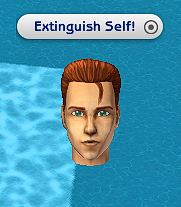 Sims will run to the pool, arms flailing, and will use the next available pool ladder or board to get in. Sims will not change into bathing suits - who's got time for that! Sims will stop flailing a suitable distance away from the pool. 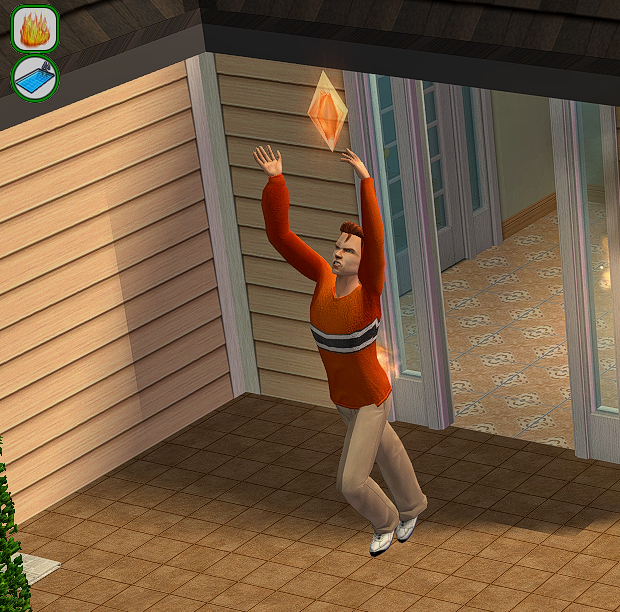 Sims are not immune while running, though. Sims have an amount of time in Sim minutes to reach the pool before they expire inversely proportional to the amount of time they were on fire. Furthermore, if you cancel the interaction or the Sim cannot route into the pool, they will resume writhing from the same point as they left.

Baked in is a minor annoyance fix that makes the random 'getting water out of ears' animation on exiting the pool actually skippable, and the animation is not played at all if there's a fire in the same room. This also means that you can (and should) remove mods that do that, or have mine load last.

The amount of time a Sim can actually survive on fire is based on a random number of animation loops. The amount of time a Sim gets to reach the pool is 1 Sim minute * the no. of loops. To prevent you from being able to just cancel the the interaction continuously, the loop count is not reset after a Sim moves, meaning a Sim doesn't gain much time.

There is another element of risk/reward management: Since reaching the pool frequently won't be a challenge for a Sim, Sims who are running to a pool will (a) have a chance of setting fire to objects/Sims near them or (b) when outside, will start fires on empty tiles. This also has the benefit of somewhat compensating for there being no way for fires to spread between rooms organically in the vanilla game. You may occasionally get cosmetic fires appearing that go out immediately - that's more an issue of how fire behaves in the game.

This mod also improves the AL Fire Safety Skill - Sims with Fire Safety learned will not flail, spread fires, and will gain extra time to reach the pool. The benefits are generous - just imagine the Sims know how to stop, drop, and roll

Here is a video showcasing the mod.

Tuning
This mod also comes with numerous tuning options so you can set it up how you like. All of these settings are found in the 'Controller' file.

Mod Conflicts
Compatible with simler90's Firemod Update 11, More Dangerous Fires from leefish, and similar. However this mod is kind of massive so I do recommend using HCDU when adding any fire or pool-related mods. This mod is also compatible with my Fire Overlay mod featured on the thumbnail.

HOWEVER! This mod will also conflict with any 'destination' mods, e.g. mods that add (but not necessarily unlock) teleport interactions, and the destination menu version of Simblender. This can't be avoided as far as I know, new custom destination behaviours don't seem to function correctly.

Known Conflicts:
• Cyjon's Fireproof Toddlers. This mod does in fact patch an oversight that could conceivably lead to toddlers dying by fire but in my opinion, the odds of this actually happening are very unlikely. The newest version of the mod simply incorporates this fix anyway because it's more annoying than anything to know there's a bug in the code, even if the bug never occurs :p
• Midge's Feed Fish. Destination conflict - unresolvable by load order.
• Ankoyume's Invisible Pool Spots Are unsupported. The result looked extremely janky, too much so for my tastes.
• The firemod from MATY, and Midge's version of said firemod conflict with this mod, but my mod will work as long as it loads second.


Very proud of this one, design-wise. Had to jump though a lot of Simantics hoops, of course :p

The other two files are respectively a controller that tracks and manages a Sim's progress and a custom destination object, necessary to interrupt routing correctly via CallTree.
Other Information