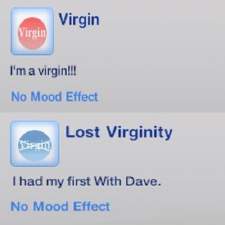 This mod gives sims a permanent moodlet describing if sims are virgins or not. As well as add an interaction which allows friends and romantic partners to ask each other if they are virgins. Additionally, I added a moodlet that keeps track of who you recently woohooed with.

-If the sim has never had their first woohoo then the virgin moodlet will be applied to that sim. If that sim later experiences their first woohoo then they will lose their virgin moodlet and then the Lost Virginity moodlet will be applied to that sim. Additionally, the moodlet will be permanent and it will contain the first name of the sim that they Woohooed with for the first time. The length of each moodlet is permanent. The Virgin and Lost Virginity Moodlet is applicable to both Male and Female sims. The Additional moodlet is Recently Had Woohoo. This moodlet will keep track of your most recent woohoo and it will have the first name of the sim that you recently woohooed with.

Conflicts
It should not conflict with any other mod, as it just adds a new interaction, A new moodlet, and applies them all using events in the game.

Inspiration
The fact that no one ever made a mod that keeps track of virginity.

Update 2.0
Update 2.0 provides two updated packages. The MonoDoll_VirginityMod2.0.zip just adds STBL's for other languages. Meaning the mod can work when a simmer plays on a different language. Additionally, for those who asked I made a seperate package called MonoDoll_VirginityModAlteredIcons2.0. This package includes new images for the Virginity/Lost Virginity Buff as well as the additional STBL's for other languages. The image is a small flower bud and a flower blooming as requested.

With the MonoDoll_VirginityMod+ItalianTranslation package, the mod is now translated in Italian whenever the game is on the Italian language. Massive thanks to LadyIsabeaux for providing me the translation!

Update 3.0
Update 3.0 fixes a bug that was brought to my attention. In the previous versions if you attempted to use the "Ask If Virgin" Interaction on a sim outside of your active household, the script would fail to show the notification pop up of the "target" sim answering that question. With this patch, you should now be able to ask any sim if they are a virgin or not whether they are in your household or out of it.

The individuals who helped me on the forums when I had questions:
-Zoe22
-gamefreak130
-Consort
-echoweaver
-Battery
-PuddingFace

Hello, I am MonocoDoll! An aspiring Modder/CC creator for TS3.

My long term goals is to become a competent modder and CC creator. And maybe even in the further future get into the H-game scene.

As of this moment feel free to use my content anyway you see fit. I would be happy if you mentioned me in the credits.