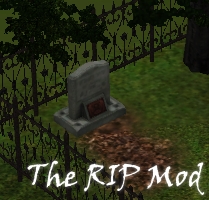 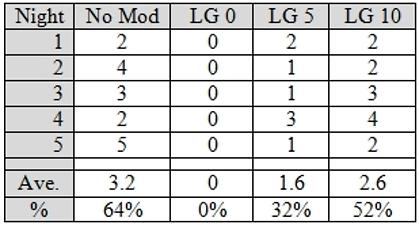 Update (12/8/09)
I've been asked several times if I'll be doing an anti-mummy mod. The answer is, no. For one thing, I can't; the program I use to generate mods has not been updated to WA yet, and so I can't edit the values that control mummies. For another, mummies are a lot more important to gameplay than ghosts are. And I'd hate to create a mod that causes your game to crash every time you play "X" or "Y" missions in Egypt. And, finally, mummies are way easy to avoid. They take forever to get around to attacking your Sim; before they do, simply leave the room they're in. Or, have a little foresight and buy Mummy Snacks as soon as you're able.

Update (7/26/09)
Due to popular request, I've uploaded a "no ghosts, ever" version. Guaranteed, never to spawn a ghost!

I've also done extensive testing into these mods, and displayed my data below.

I recently had my first Sim die of old age. The family buried him in the family plot out back, and mourned. Things went fine ... until the next night, when his ghost appeared. Which was fine, I was expecting the ghost. But it showed up at 11PM and stayed well after sunrise. The next night, the ghost appeared again. Over the course of the next five nights, the ghost appeared for four of them. Most days he would stay until 7AM to 8AM, well after sunrise, when all good little ghosts should go back to their gravesite.

I got tired of it. So I went in and tweaked the values. Now the chance of any given ghost appearing is smaller, although they will still come every so often. They will also only stay around for a maximum of 2 hours before disappearing.

This comes in three flavors:

What does that mean? How did I arrive at these numbers?

To test these mods, I created a new family consisting of 6 Sims. I then proceeded to lock 5 of them in a room and set fire to a stove, giving me 5 ghosts to test the mods with. (I left the sixth Sim alive to continue the household going) I then played the household in five-day increments, to test how many ghosts showed up each night, four times: once without any mods, as a control group; then with my NoGhosts mod; then the LessGhosts_5; then the LessGhosts_10. The results are in the graph below: 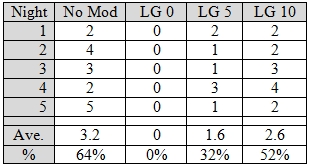 Note: Some people have been complaining that ghosts only show up in the graveyard, not on home lots. I've found this personally not to be true. I believe that this is simply a case of perception: the odds of one particular ghost spawning on a home lot is significantly lower than the odds of any of the dozens of tombstones at the graveyard spawning a ghost. In other words, it's an odds game. To summarize the summary: if you have a tombstone on a home lot, just wait -- it might take four or five nights, but the ghost will eventually spawn.

Please only use one mod. This mod also will conflict with any mod that modifies ghosts, but I'm not currently aware of any out there at this time. This mod does work with Vahi_Master's "Ghost Reaction Remover" as that mod leaves the ghost itself alone, only modifies people's reaction to it.