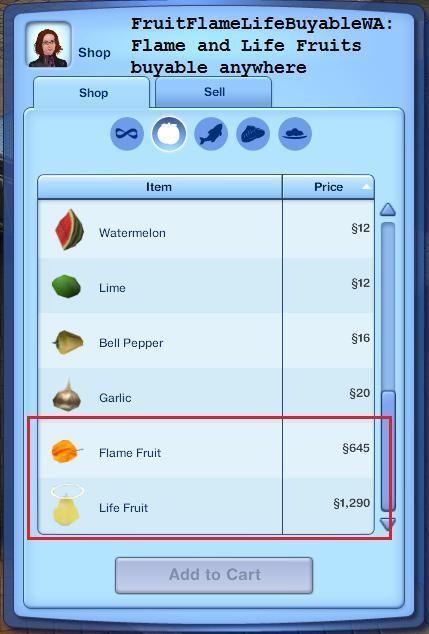 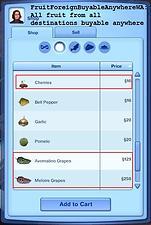 1,593 Thanks  Thanks     113 Favourited
I was bored of having to trek back and forth between countries just to buy fruit and veg (not to mention HOURS of hunting for those darned grapes), so I made a selection of little tweaks to make fruit shopping easier! Read the descriptions of the flavours carefully before choosing. The France destination is the only one with non-buyable exclusive fruit, the four rare Grape varieties, the other destinations' exclusive fruits (Pomegranates etc.) are all buyable in their own locations by default.

There are now only two flavours as the others seemed a little redundant. One making all fruit, including the Life and Flame fruits and the grapes, buyable everywhere, and one making just the location-exclusive fruits buyable. If you don't want the others to be buyable just don't buy them, or you can make your own personal mod, it's quite easy to do. However remember to only install one.

Unsurprisingly, you MUST have World Adventures and Ambitions for this to work (it should work with any combination of patches, as long as you have Ambitions installed). If you have not downloaded any new mods since installing Ambitions, you need to create a new mods folder and move some files. See the Installation Instructions on the Download page for details, it's quite easy.

These mods are incompatible with any other mods that modify plantables/buyables, and do not use them with pre-Amb gardening mods. In fact, when installing a new expansion pack, you should uninstall all your old mods as compatibility issues can arise from the two versions trying to work together.

Other Buyables: SimsMX has made a mod (or pair of mods, really) that make the nectar maker, shower in a can, cameras, training dummy etc etc. buyable in Buy Mode. I will not be making a mod to make those items buyable in a shop as his mod is a much better idea and much better implemented. Go download his mod if you want to be able to buy the new equipment at home!

There are two flavours. Only install one.

This flavour will make the Flame Fruit, Life Fruit, the four rare grape varieties - Cherimola Blan, Cranerlet Nuala, Meloire, Renoit - and the location-exclusive fruit - Pomegranates and Cherries from Egypt and Plums and Pomelo from China - buyable in any Grocery or Food shop in the game world. To compensate for cheatiness with the rare fruit I have upped the price of the Flame/Life Fruits from $24/$33 each (what it was by default) to $645/$1290 each respectively, and the price of the rare grapes from the default $7/$8/$10/$13 to $300/$400/$500/$600 respectively.

EDIT: I've had a few enquiries about making the fruits and grapes cheaper. Let me make a blanket statement: This mod is a blatant cheat as it is, and those fruits are supposed to be hard to get. If they were cheap as well as buyable, the game would lose even more challenge - not that there's much challenge to begin with, it's easy to find seeds and very easy to make money. Or you can just kaching things up a bit, or edit the XML yourself, if you're that bothered.

Just makes the location exclusive fruit and veg - all six Grape varieties from France, Pomegranates and Cherries from Egypt and Plums and Pomelo from China - buyable in any food shop in the world including the Home neighbourhood. The Life and Flame fruits are not buyable with this flavour. The prices of the normal fruits haven't been changed, but the grape price increases still apply - see above for reason

I have playtested these mods (one at a time, obviously

) extensively in my game.

Additional Credits:
Peter L Jones for creating s3pe.
Delphy and the modding community for making it easy to mod the Sims games.

See: Game Help:TS3 CC Basicswiki for a full guide!
Back to download view
98 Comments / Replies (Who?)