by scumbumbo Posted 16th Nov 2014 at 8:36 PM - Updated 17th Apr 2019 at 9:16 PM by scumbumbo : Updated for current (April 16, 2019) game patch
February 06, 2020 - Scumbumbo has passed on but his work and memories are still being kept alive by many of those whose lives he has touched. To download fixes for his mods, please check <a href="https://scumbumbomods.com/">https://scumbumbomods.com/</a> and please direct any questions or concerns to his discord channel linked there. 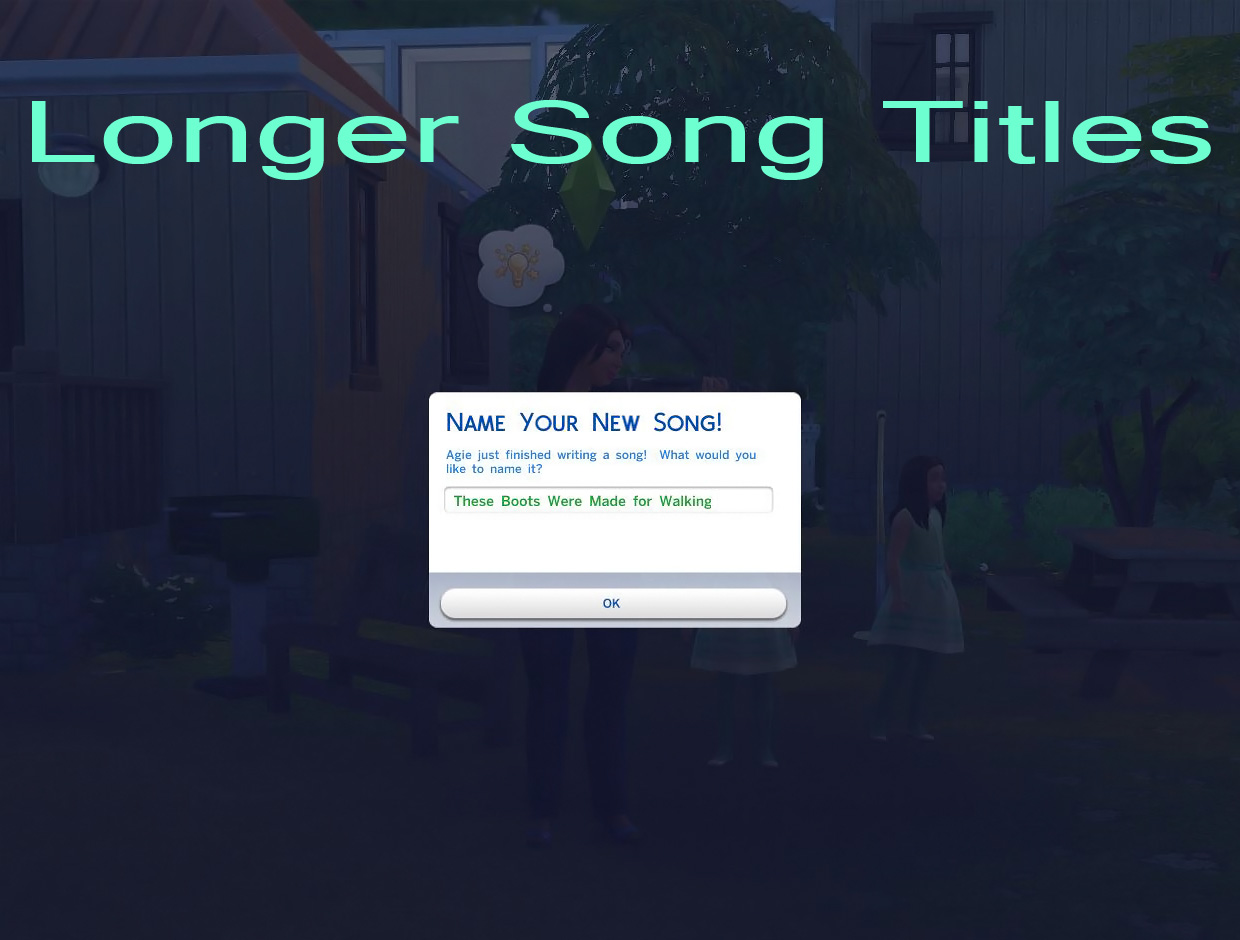 Updated 04-17-2019 - The mod has been updated to version 5 which resolves some extremely minor issues. It's actually needed an update for some time, but the changes weren't in any way game-breaking.

Be sure to remove the old version when you upgrade!

Name Your New Song!? OK, hmmm, something country-ish... how about "Thank God I'm a Coun"... nope, too long. I'll try "These Boots Were Mad"... no. I'll have to go with something shorter... Or I could just fix it. You can enter long book names, why not song titles?

OK, so it's not some great major milestone of a mod, but it does fix something that really annoyed me (and maybe it is just me). This will increase the maximum length of a new song title from the default, which was only 20 characters, to a new maximum of 60 characters. I could have made it longer, but sixty seemed like it was plenty. Good enough for pretty much any song title except "When The Apple Blossoms Bloom In The Windmills Of Your Mind I'll Be Your Valentine" or "Several Species of Small Furry Animals Gathered Together in a Cave and Grooving With a Pict" and who would use those for song titles?

Just unzip the package file to your Mods folder as usual.

This mod may cause conflicts with other mods which change sim song-writing actions. Due to the wide variety of mods and sources for them, it is unlikely I will be able to help you with such a conflict. If there is a conflict, either one or both mods may fail to work properly, your game may crash, frogs may rain down from the sky...

Tech Notes
This may be of interest if you are experiencing a conflict and know how to debug such issues, or if you are creating another mod affecting song-writing and wish to incorporate these changes to eliminate conflicts. If you do create another mod using these changes, I would appreciate receiving credit.


Additional Credits:
Kuree and all the others at Sims4Group who have put together the S4PE tool.

Need more information?
Back to download view
44 Comments / Replies (Who?)