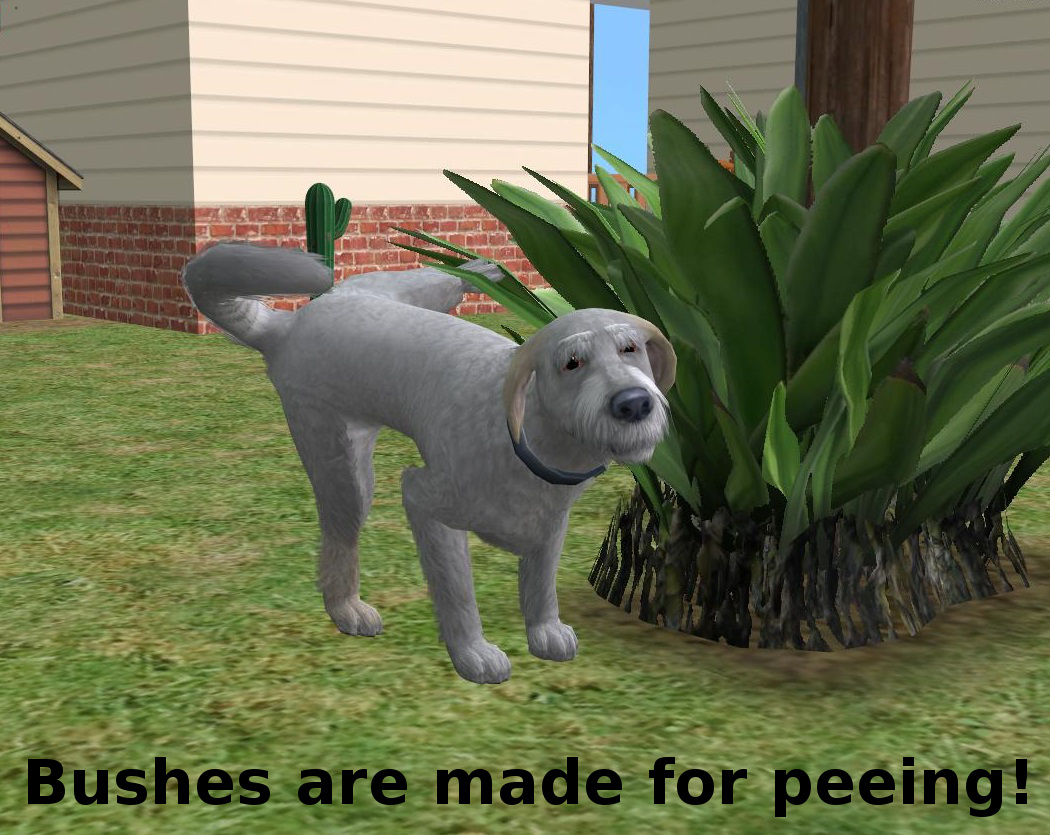 325 Thanks  Thanks     66 Favourited
I've got another little quickie mod for you guys. For years I've been hearing people say they could direct dogs in their game to pee on bushes, when using the boolprop controlpets on cheat. And for years I have tried to do this in my game, with no success. The interaction just wasn't there. Yesterday this discussion came up again, and thanks to ihatemandatoryregister, smobie1, SIMelissa and clsve I now know why I've never been able to in my game. EA coded the pee on bush interaction to work for pets... and then forgot to enable it for pets.

They never cease to amaze! But fortunately since it's such a silly little mistake, it's very easy to fix!

What is this?
This is a global mod that overrides the pie menu on shrubs, enabling the use-interaction for adult/elder dogs and cats. The interaction is autonomous, so you may see cats and dog seeking out a bush to pee on from now on. And of course, if you use boolprop controlpets on to control your pets, you will be able to direct them to use a bush by clicking on a shrub. The interaction is available regardless of bladder motive level, and regardless of if the pet is trained or not, so you should have it available all the time. Hooray for finally being able to tell our dogs when to pee, without having to train them first! We could already direct cats with the help of litter boxes, but could be useful if one for some reason does not want a litter box.

This mod is not guaranteed to work on custom shrubs. It depends on how they were made. If they still use the semi global pie menu, it will work. If they don't, it won't.

Compatibility
Requires Pets. Compatible with all EPs released after Pets.

Conflicts
Since some people are able to direct their pets to use bushes, there is definitely some mod out there that already does this. We don't know which one, which is why I felt a new mod dedicated to this specifically would be helpful. However, it means this mod will most likely conflict with whatever it is that is already doing this for some people. So basically, if your pets can already pee on bushes, don't get this because well you don't need it, and it would probably conflict.

This mod conflicts with Dukasha's toilet shrub hack. The toilet shrub mod was not updated to include pets, and isn't compatible with pets and shrubs, so I'm afraid you'll have to choose between this mod and Dukasha's mod.

This could also conflict with poorly made custom plants. It's not super likely, but it could happen. All conflicts will show up in HCDU, so if you think you have something that might conflict just run HCDU and see what it says. If you find a conflict, please let me know and I'll look in to it.

Credits
Thank you clsve who posted the group of shrub code, made finding the problem quicker.
Thank you to SIMelissa who confirmed she could direct her pets to pee, and who was kind enough to do a test for me to confirm that it was CC-induced and that there was some kind of problem with the Maxis code.