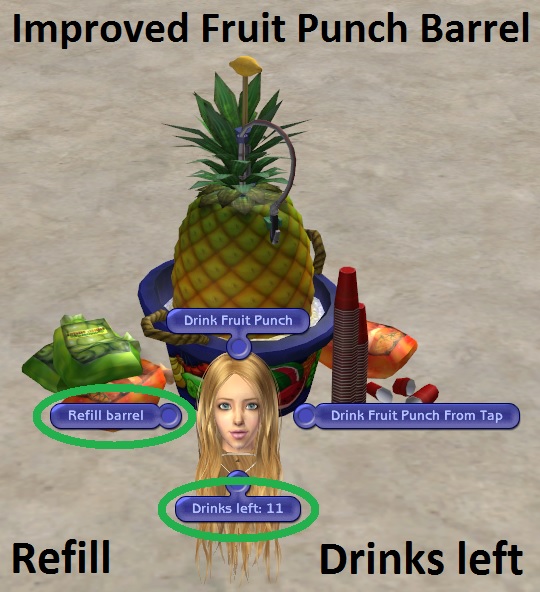 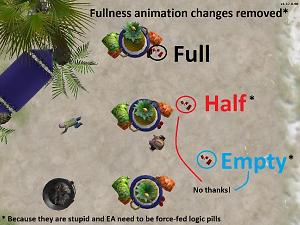 Created by gummilutt View Policy / About Me View Downloads Home

Themes are great! Nothing like a good theme to make you dust off an old unfinished project and make it new and shiny (and functional

). Celebrations, what comes to mind? Well for me and my Sims, celebrations means fruit punch. Sims love fruit punch. Fruit punch for everybody! Me, I don't get fruit punch. No, I get to replace the barrel all the time because they drink it dry. Do I like replacing the barrel every time they throw a party? No, no I don't. So I figured, isn't it time we have a creation that's for us, the players? Something that makes our life easier? I say yes! Which is why I made the fruit punch barrel refillable! No more going into buy mode just to sell the barrel and replace it with a new one. Now those lazy Sims of yours can do the work themselves next time they get all fruit-punch-oholic on you. Hooray!

What does it do?
This is a global object mod, that adds two custom interactions to the fruit punch barrel. I've also cleaned up the code and fixed a few annoyances. Text is available in English and Swedish.

Refill
New animated custom interaction that tops off the barrel so it's full again. Each drink costs 10 simoleons. You can use the interaction as soon as the barrel is below full, and the Sim will fill up the barrel. You will only be charged for the number of drinks that get added, so if it adds 2 you only pay 20 simoleons. In Maxis coding, the barrel holds 15 drinks. I think that's rather lower considering the size of the barrel and the size of the cups, so I've made two versions. One that sticks to the original 15 drinks, and one that fills it so it contains 30 drinks. Only use one version.

If you'd like to change the cost per drink, or the number of drinks the barrel holds, I set it up to pull the information from a BCON so it's easy to edit. I've labeled the BCON so you can see clearly which line is which. If you need picture instructions, let me know in a comment and I will add one.

Drinks left
The drinks left counter interaction isn't really an interaction. If you click it, nothing happens. It's just there to tell you how many drinks are left, by adding this number to the pie menu. I added it so you can check fullness level in advance, and know to top it off before calling the guests over for the celebrations. In addition to the pie menu option I've also added a dialog pop up that tells you the barrel is empty. The pop up gets triggered when someone takes the last drink.

Fixed annoyances
If your Sims have ever emptied a fruit punch barrel, you probably know that the drink from tap interaction disappears when empty, but the get drink one remains. If you select get drink, it pops up a dialog saying the barrel is empty and you should buy a new one. I never understood the purpose of that, especially since it's not autonomous if barrel is empty and therefore only happens if you direct the Sim at which point the lack of a drink from tap interaction already told you the barrel is empty. Since I now added the drinks left counter and a refill interaction, I changed it so the drink interaction only appears if the Sim can actually get a drink.

EA coded animation changes that supposedly signal that the barrel is getting emptier. There's one at the half way point, and one when it's empty. Cool, you might think. I did too, when I saw code. Ever notice the little group of three cups on the floor, next to the stacks of cups? Turns out the animation changes.... are moving those cups further away (see picture for a demonstration). And I don't know about you but I think that's dumb. Who moves cups slightly further away to signal the container of liquid is running low? Aside from the absolute lack of sense behind it, it also causes the cups to magically appear behind walls if the barrel is placed up against a wall which I find very annoying. No thank you no, away it goes. With this mod, the three cups on the ground will stay where they are, regardless of how not full the barrel is.

Known "issues" - Not really issues, just decisions I made you might want to know about
The barrel depreciates with each drink. This is original maxis coding, and after 10 drinks the barrel will be worth 0. I decided not to change this when they refill the barrel. Yes, they spend money to refill it, but who would buy a used fruit punch barrel? I know I wouldn't, so I decided that it's reasonable that continues to be worth 0 even if you refill it. After all, the whole idea of this mod is that you no longer need to sell the barrel.

The 30 drinks version kicks in right when you buy it, but price to buy from catalog isn't increased. This is intended. In order to change the price in catalog I would have had to make you install part of the mod in installation files and it's not worth that hassle. So when you first buy the barrel, it holds 30 drinks for 145, and when you refill you will be charged 300 for a full barrel. Think of it as the fruit punch company giving your Sims a deal of 2 for 1 on punch with barrel purchases.

I originally said 30 drinks doesn't kick in until first refill. I apologize, I was debating setting it up that way due to the free extra drinks, but I decided not to, and when I wrote upload thread I was so tired I got them mixed up.

The drinks left counter does not update until the end of the drinks interactions. This is because Maxis added the update to drinks left at the very end of the interactions, and because of programming reasons it was easier to keep it that way. So just so you know the counter won't go down until the Sim is done drinking from the tap, or they turn to walk away with their cup.

In the youtube video, the refill interaction appears even though barrel is full. I did the video before I decided to add that check, so although video suggests it's available with a full barrel, in the uploaded version you have to drink one drink before it appears.

Compatibility
This mod requires University. Which version you should use depends on what your latest released EP is. If your latest EP is Pets or below, use the Uni-Pets version. If you have Seasons or higher, use the SeasonsAndUp version. Please note that the animation used is from Seasons, so if you do not have Seasons, the Sim will simply walk up to the barrel and it gets refilled.

Credits
gdayars for teaching me how to call animations, for testing, for giving feedback, and for helping me figure out one of the problems I came across with this creation. Thank you very much

Pescado for his rechargeable aspiration objects, which introduced me to the idea of refillable objects way back in the day