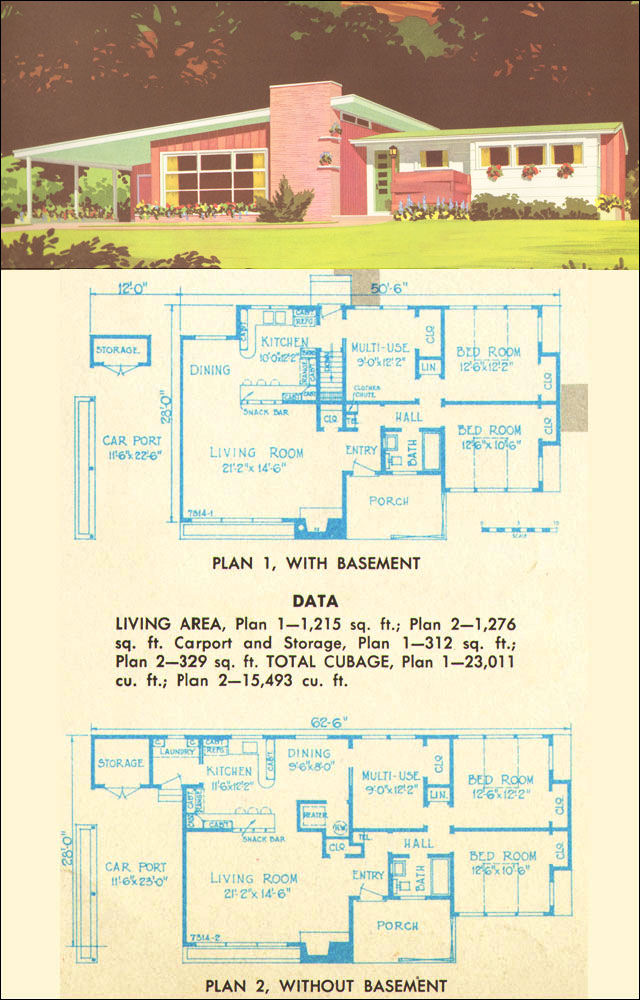 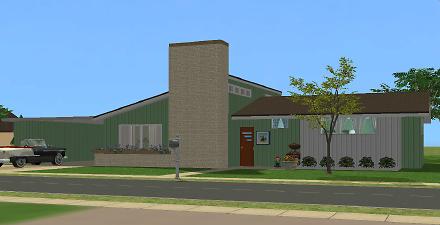 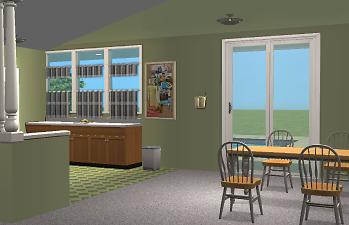 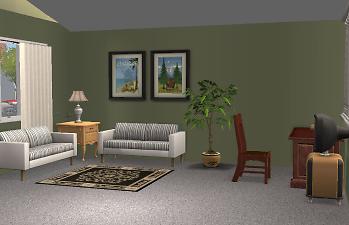 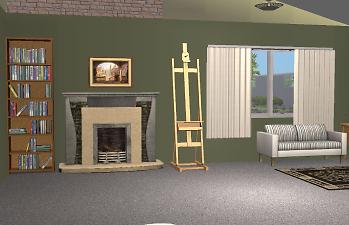 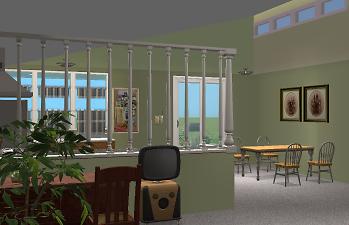 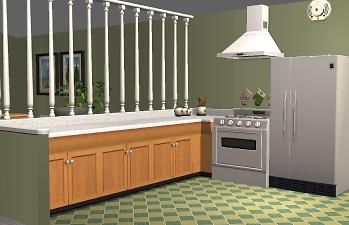 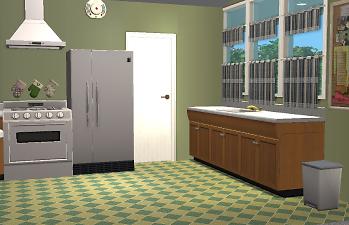 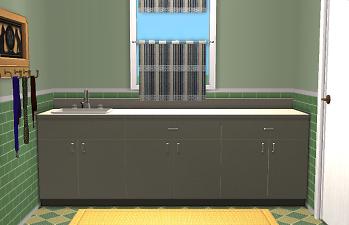 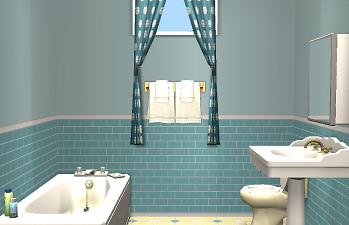 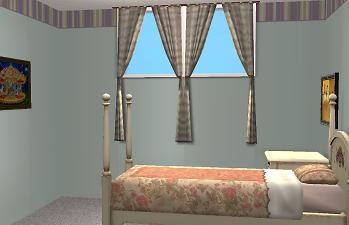 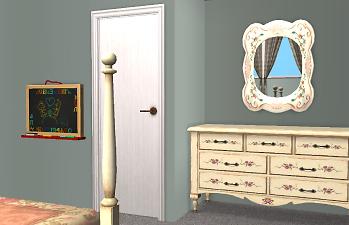 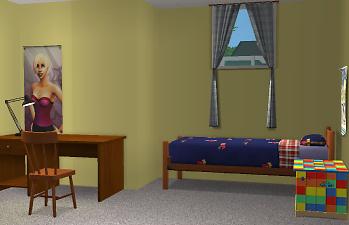 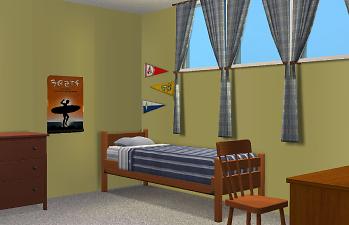 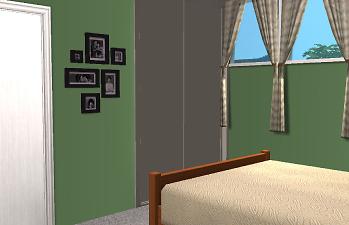 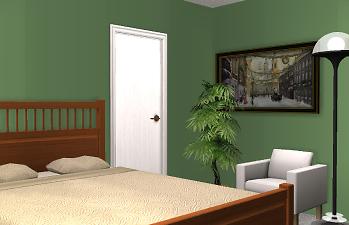 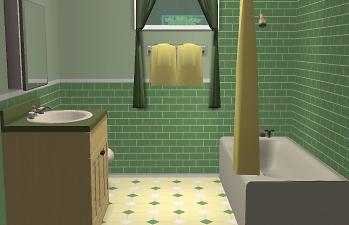 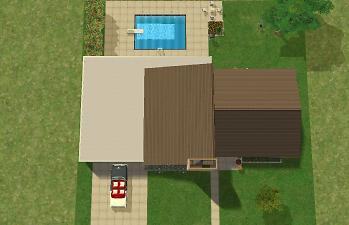 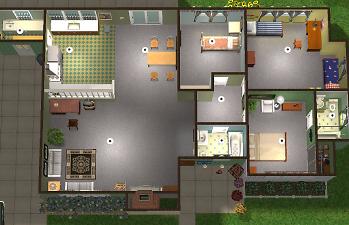 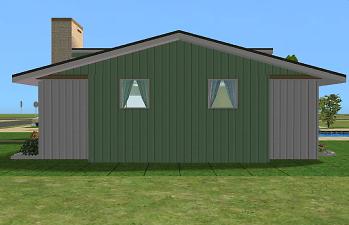 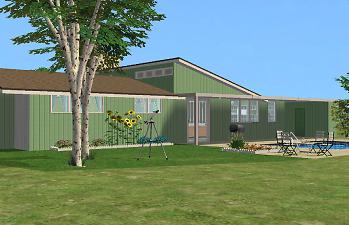 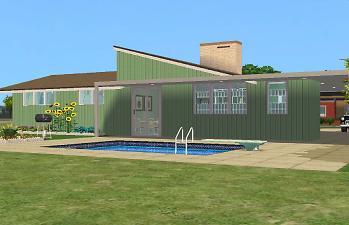 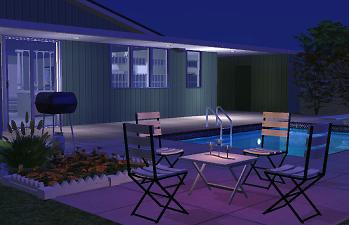 I played this 1954 Mid Century Modern with Brandi Broke and her children - and her husband, Julien Cooke. It was a little more house and a lot more Sims than I like to play, but it played well. And Brandi and Julien made it fun (they had twins together, meaning that at one time, seven Sims lived here).

I almost didn't build this house when I found it; it looked too busy. But once I saw past all the planters, the window boxes, the plant shelves climbing the chimney, and the mixed siding colors and textures (what was the architect trying to achieve?), I kinda liked it.

I knew the shed roof wouldn't work, but could get around that by making the carport roof flat, which I did. But it didn't look right. So I used a design technique I've seen in other plans - I added a storage wall. It really does give the carport a more incorporated and finished look.

Following plan 2, I got rid of the storage room, the utilities in the dining room!, and the fence around the front porch, which looked wonderful but visiting Sims had trouble getting around. I had to juggle walls and doors when I widened the hall, but the extra space comes in handy. I enlarged each of the bedrooms on the end by one tile so I could add a bath in the master bedroom, which also added an extra tile to the multi-use/3rd bedroom.

I had a two-seater snack bar on the kitchen side of the half wall but it didn't play well. Sims would use it (for snacks, of all things) but couldn't pick up anything from the inside island. It's a shame; it looked really nice. But if you don't mind cleaning up behind your Sims, you can always put the snack bar back in.

So it's a 3BD/2BA home, with a living room, dining room, kitchen, laundry (just add your own washing machine), a covered carport with storage (I added a door!) and a pool.

Despite the modern features, the exterior of the house has a cottagey feel, and I think that's what the architect might have had in mind with his siding choices and the abundance of plants and flowers. He was attempting to appeal to the tried-and-truers with something that, however new, offered something inviting and familiar. I kept what I comfortably could of it, but you're welcome to make whatever changes you like.

The house gets its name from the catalog, "Prelude To Happiness," published by the National Plan Service in 1954, in which this house was featured.

I hope you enjoy playing this lot as much as I did. 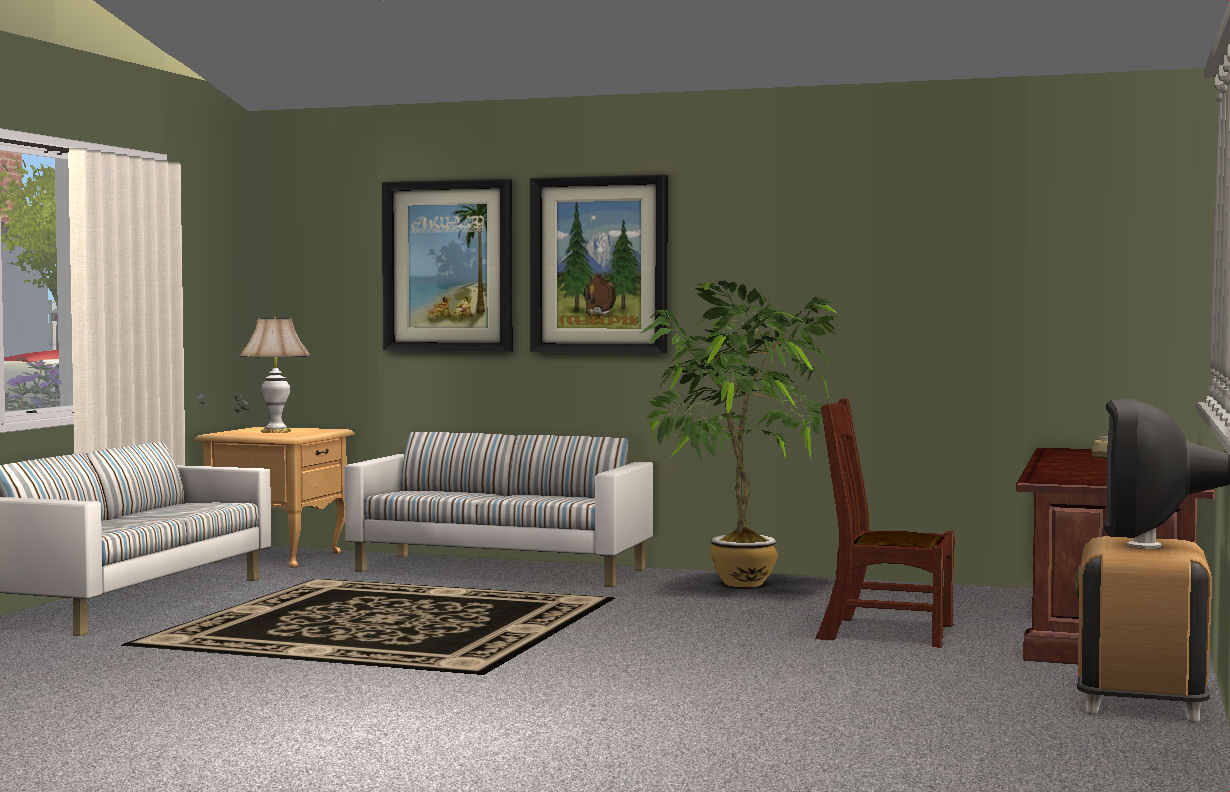 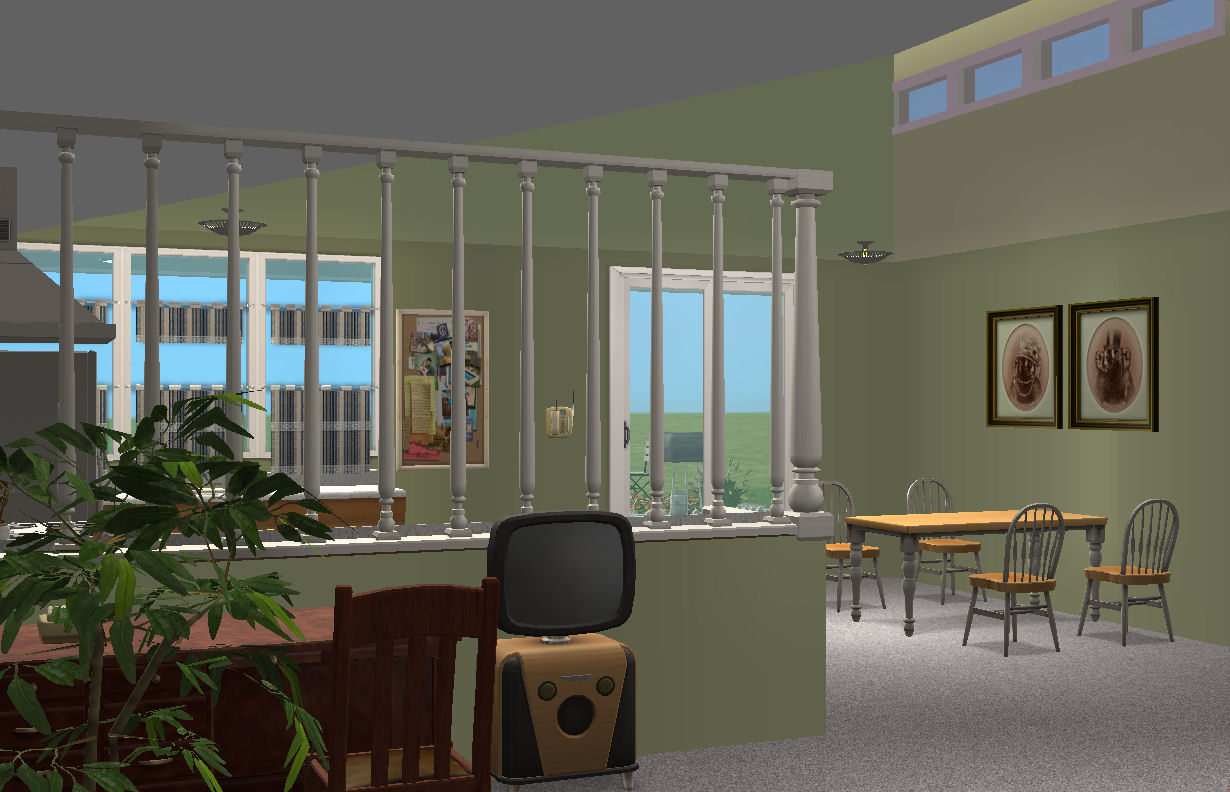 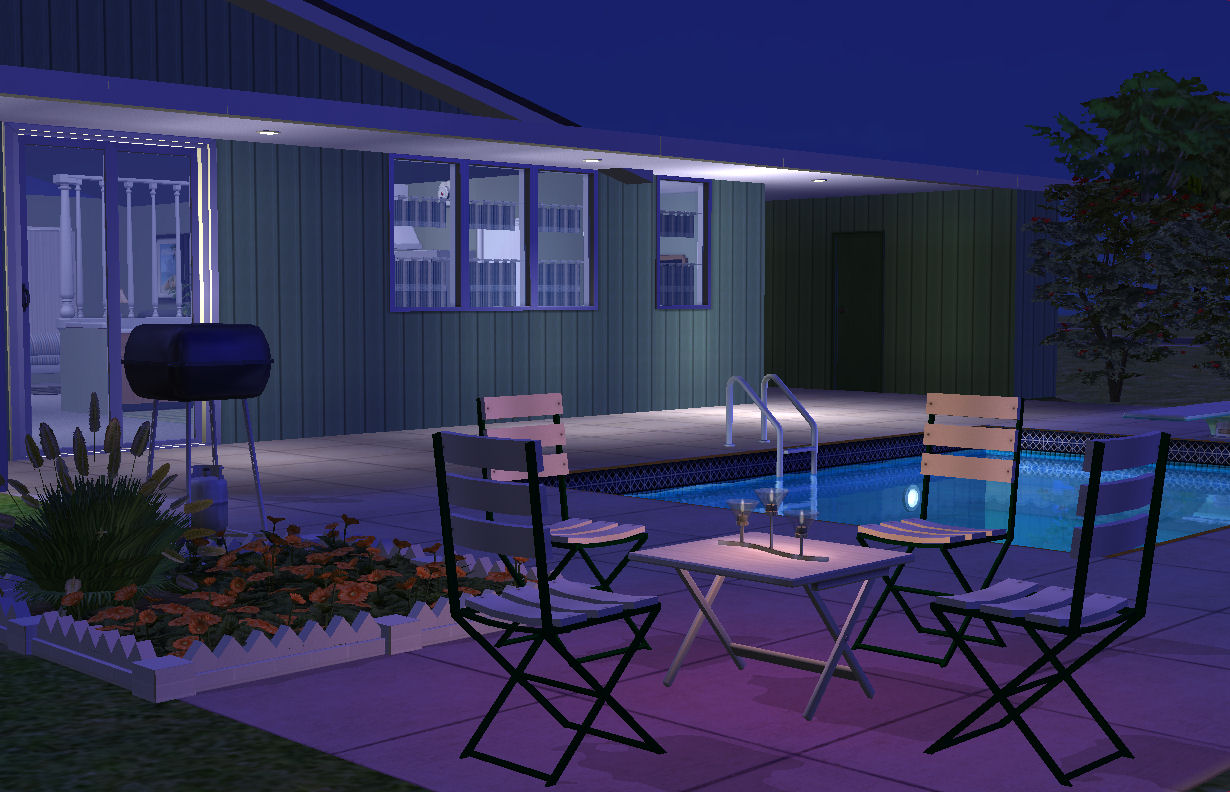 Additional Credits:
Thank you to the researchers and editors at Mid Century Home Style for their dedication to preserving the record of mid century architecture. Their house plans and photo galleries of interior design are greatly inspiring. You can view this plan here: http://www.midcenturyhomestyle.com/.../54nps-7314.htm