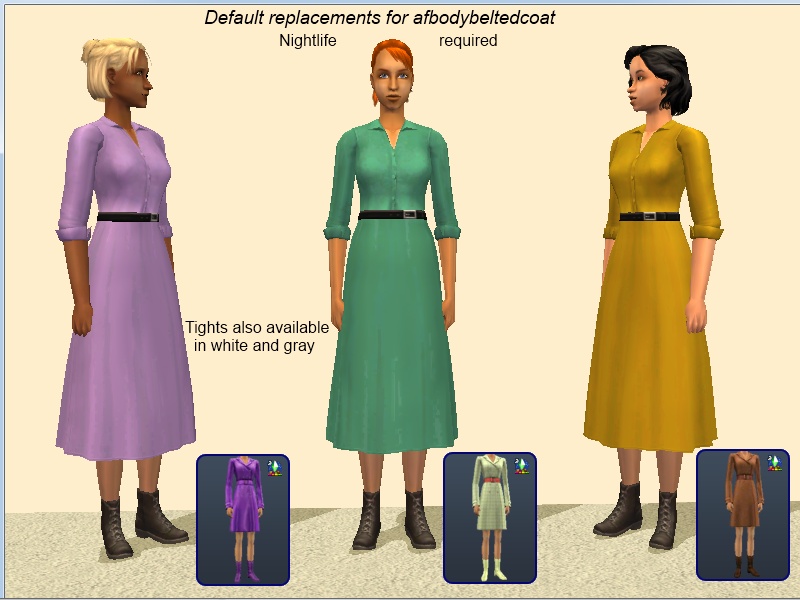 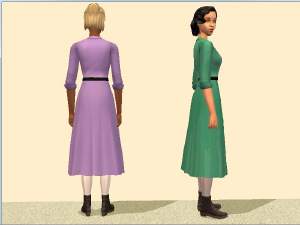 The mesh is by DeeDee, and is included in a separate rar file. The replacement outfits are in three rar files, one for each of the three afbodybeltedcoat outfits. While the original Maxis outfits are AF only and Everyday only, I've enabled the replacements for YAF, and set them as Everyday and Outerwear. Non-default versions are available in a separate rar file. The replacements require Nightlife, since they replace an outfit from Nightlife. The non-default versions do not require any expansion or stuff packs. Resources are compressed.

I texture-swapped the high-top oxford-style shoes for Julie J's black 4t2 boots, pasted in the belt from DeeDee's originals, and replaced the heavy wool stockings that 2FW used with texturing taken from one of HP's Modesty replacements. The white and tan tights use HP's texturing, edited to fill the space used by the wool stockings, the gray tights are recolored by me. The tights are slightly translucent, so some hint of the Sim's skin tone may show through them.

Note: The Nightlife packages for both fanseelamb's Maxis Outerwear as.... Outerwear! and Phaenoh's Great Clothing Migration affect the afbodybeltedcoat outfits. If you use either of those category mods, or any other category mod that affects afbodybeltedcoat, the replacement packages must load after it, or the replacement outfits will not appear properly. You should not have a problem with that if the category mod is installed in either the \TSData\Res\Catalog\Skins or \TSData\Res\Catalog\Bins folder of your latest expansion pack.

Additional Credits:
DeeDee, for the mesh and the belt texture.
2fingerswhiskey, for the textures.
susen70, for the no-undershirt version that I used, and for the image that prompted me to think of the outfits as coats.
Julie J, for the boots.
HP, for the tights.
This is a new mesh recolour, and means that you will need to download the particular mesh itself in order for this to show up in your game. See the Meshes Needed section or read the text for more information.
Files Need help with downloading or installing content? Click here!