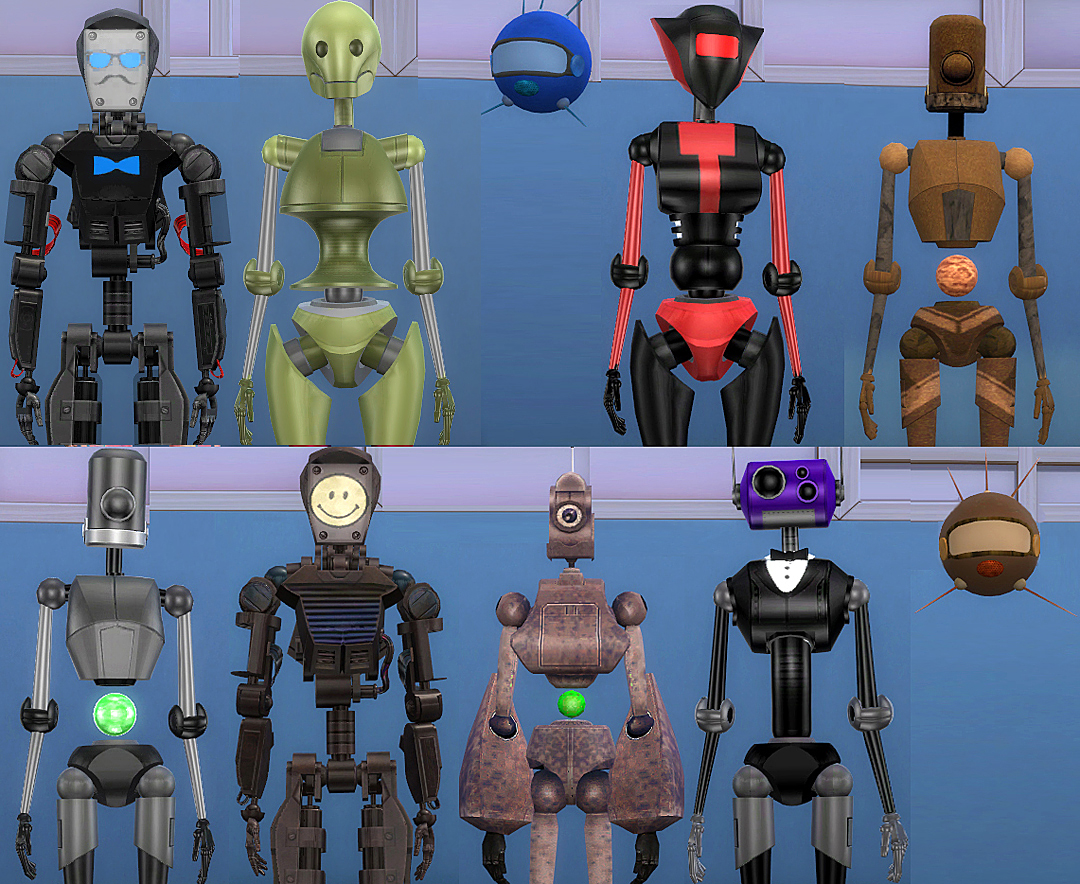 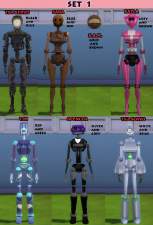 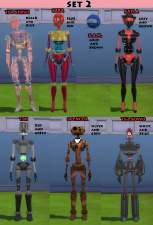 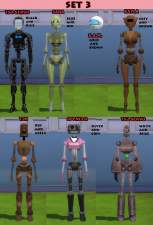 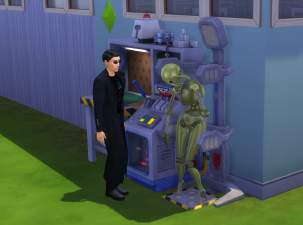 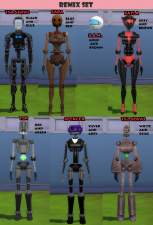 Created by Esmeralda View Policy / About Me View all Downloads

***UPDATE 3 FEBRUARY 2021: Change to the way the new activated robot initially appears*****
The January 21 2021 patch created a glitch in this item which now causes a newly-created servo to have a human body by default! I really like this, it must be the first time EA broke cc in a way that's actually good instead of bad. So now, if you want a human servo/'synth'/'android', you can leave it at that. Otherwise, the rest of this item still works as intended, you can still choose the other 'recolour' options and the robot bodies will appear as usual. If you prefer the Red-Blue robot option instead of a human, just choose another recolour and then go back and choose Red-Blue, and it will revert to the Red-Blue robot body. But note that once you change the human body to a robot body, you won't be able to get the human body back again unless you create a new Servo. I really like that this glitch means we can have human servos without needing an additional mod for that.

***UPDATE JANUARY 19 2020: ADDED ALTERNATIVE DOWNLOAD FILE OF ALL BOTS IN SEPARATE PACKAGES***
As I've had several requests for different combinations of both this upload and my second one, Lots More Bots, I've now added a new zipfile that contains all the bots as separate packages which you can install to make your own specific sets. I've done the same with Lots More Bots, so you can now combine bots from both uploads.

Two things to remember: 1) You can only have one bot of each 'recolour' installed at a time - eg, you can only have one Blue and Red bot, one Red and Green bot, etc. If you install two bots of the same recolour, they will conflict. 2) You must also install the LotsBotsServoVFXOverrideTuning package from the zip file or else the bots will have those glowing eyes and brain effects.

So: in your Mods folder, you install seven bot package files of your choice from this set and/or Lots More Bots - one of each recolour - and the VFX override package.

UPDATE DECEMBER 19 2019 - PLUMBOT NECK FIX: Fixed the four Plumbot necks' detaching during exaggerated animations and recharging. I replaced their necks with those from the TS4 Servo and now they stay put. Please note when recharging, where their neck joins their head there is some minor distortion. At least their heads no longer fall off when they recharge!

Coming briefly out of Sims 4 retirement because University finally added two of my fave things - vehicles and robots.

I was so pleased to hear that Discover University had added robots, but horrified when I saw what they looked like. Don't know about you but I found them hideous, quite surprising after how cute the Sims 2 Servos and Sims 3 Plumbots were. So I made a set of default replacements which were more to my liking and I hope you'll find at least one variation useful too.

This is a set of 'outfit' default replacements which simply replaces the Servo's seven recolour choices with new meshes and textures without doing any 'modded' stuff, the one small exception being that I had to modify the Buff tunings in order to get rid of the glowing eyes and brain effects (VFX). I didn't change the pie menus, the unactivated servo's appearance, or anything else fancy that changes game code. This is so that hopefully this item won't be broken by future game patches as sadly tends to happen to many mods and modded items, as we know.

There are three packages, consisting of the same seven robots with three sets of recolours. You can only use one at a time. But they can be swapped between gameplay sessions for a different set of recolours. Just be sure to delete your localthumbcache.package when doing that, or else you'll see the previous set's portrait and mood pictures in your HUD instead of the current one.

I made them from 1) the default TS4 servo but with the face screen removed, 2) Four TS3 Plumbots assembled from my collection of TS3 Plumbot parts uploaded here; two 'male' ones and two 'female' ones, which I named after the names the TS3 devs gave the heads I used, 3) Sims 2 Servo from my Servo conversion uploaded here , and 4) My own creation, the S.A.M. headbot from my collection of S.A.M.s uploaded here. I decided to retain the default TS4 servo for one of the options but with more 'fun' recolours to make it less hideous, so that the pack has the historical continuity of containing EAxis robots from all three 3D Sims games.

The bots are a variety ranging from shiny and pristine, to shiny but a bit shopworn/paint-chipped (sort of Shabby Chic), to medium-shiny, to rusty. The idea of having rusty robots and of including S.A.M. were both requests, and I liked the ideas so incorporated those. As mentioned, I have not modified the pie menus, so the overrides retain the default recolour names such as Black and Blue, etc. All will be made clear in the below reference pics. 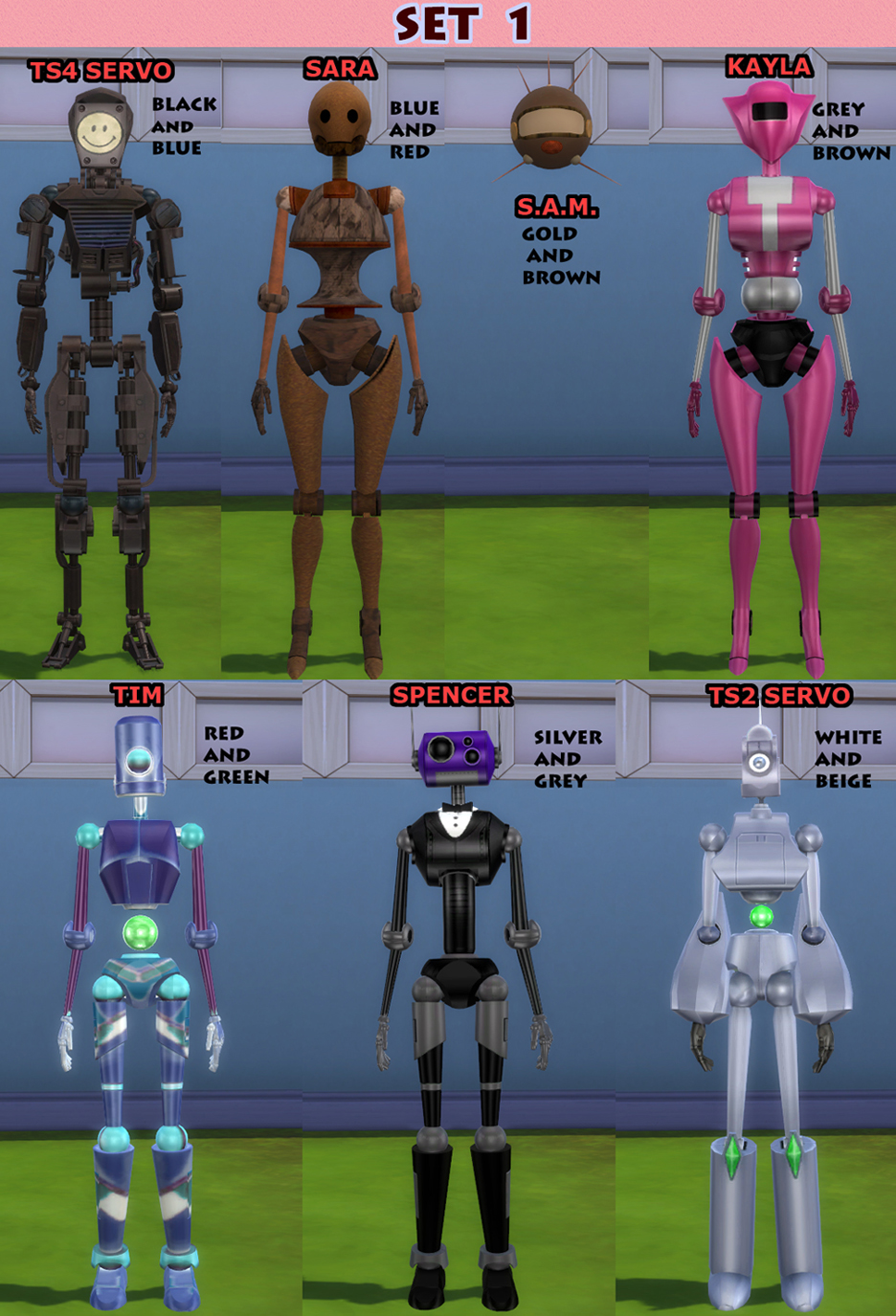 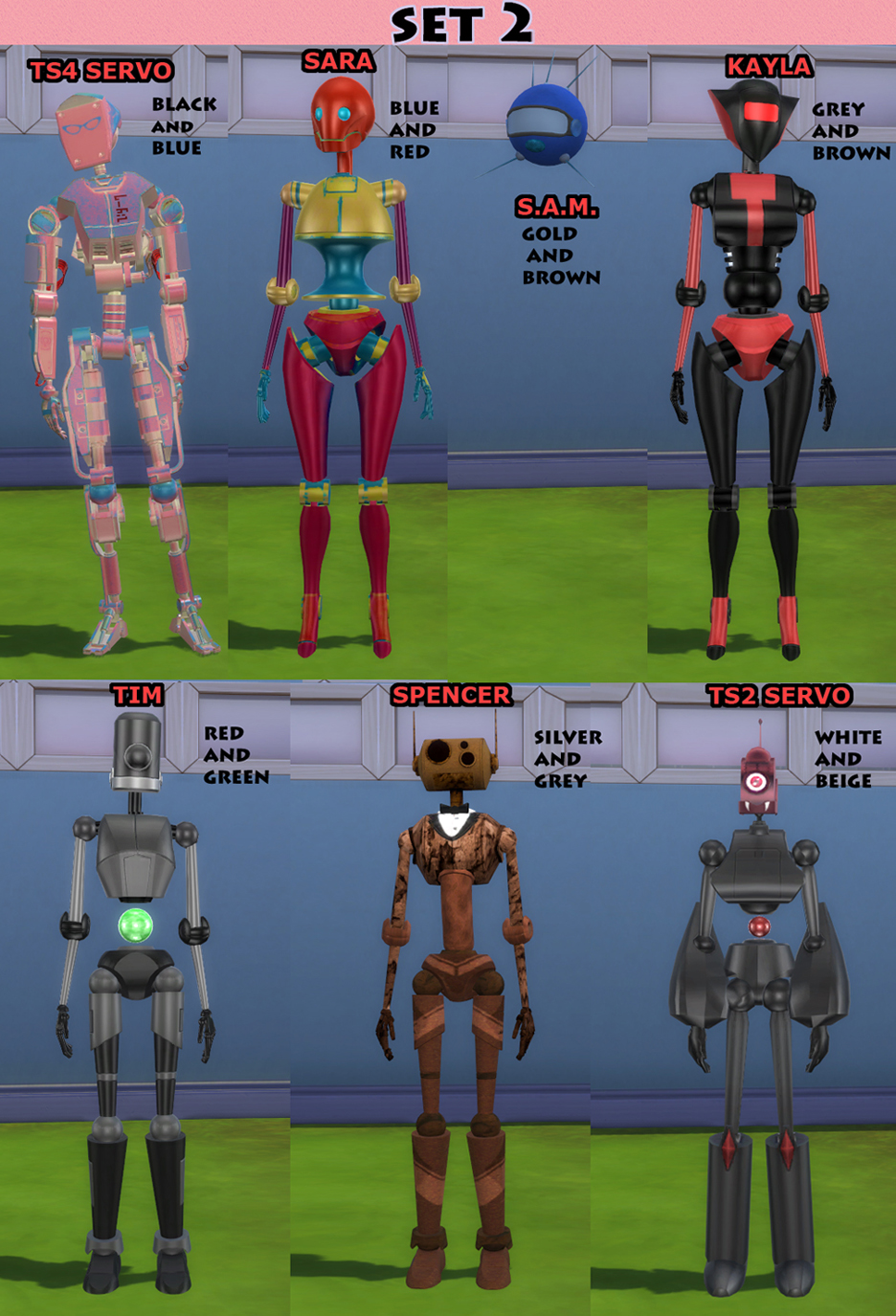 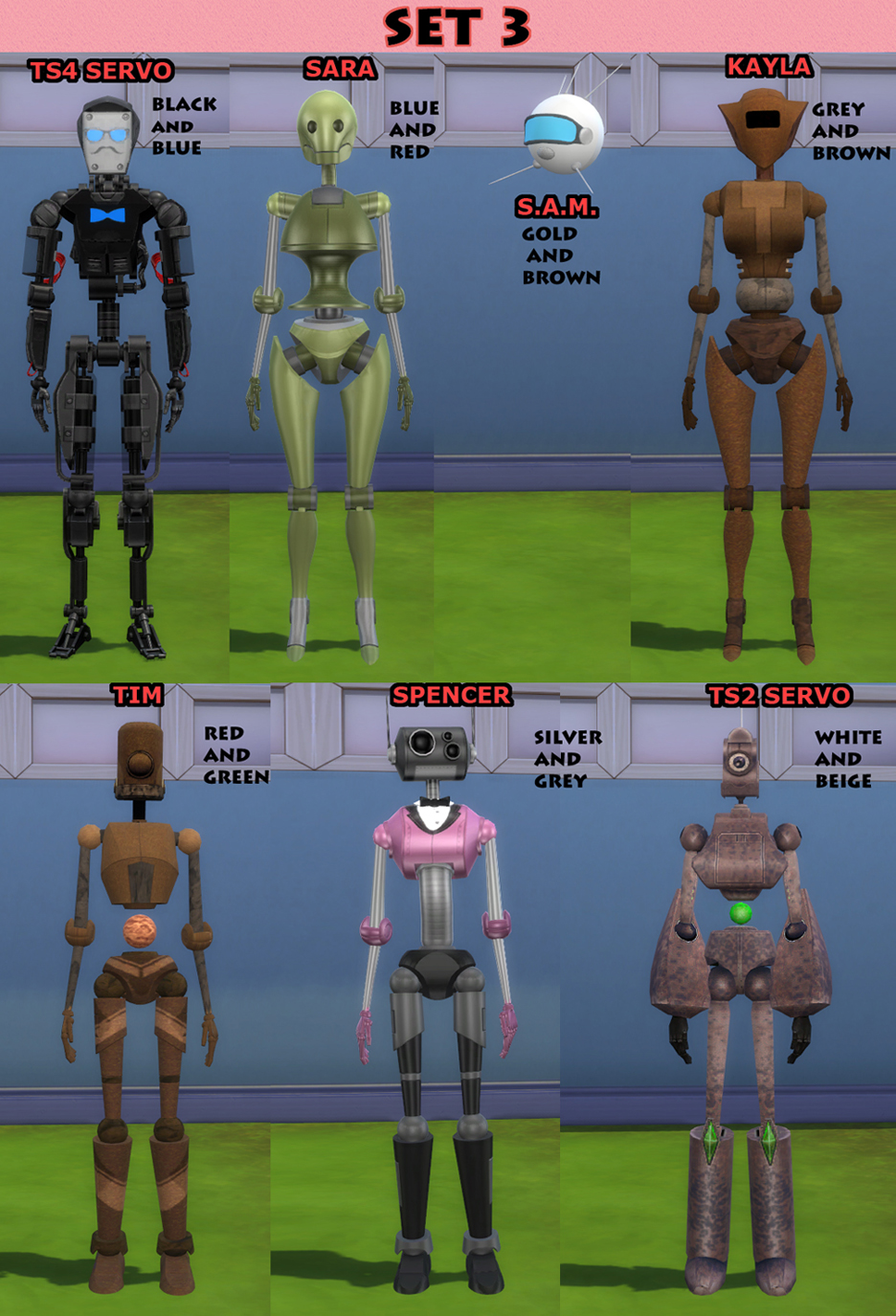 ETA: A member asked me for a custom 'remix' set consisting of Sara and Spencer from Set 1, Tim and Kayla from Set 2, and both of the Servos and S.A.M. from Set 3. Having assembled that, I decided to add it to the downloads in the Files tab in case anyone else would prefer that combo too. New reference pic of the bots included in the remix set has also been added to the new package's zip file and to the screenies at the top right of this page. ETA: And, note the January 19 2020 update, which now lets you make your own combos!

When you build your Servo and are ready to activate it, you will see the default TS4 Servo in the stand. When you activate it, it will disintegrate and dissolve into Sara: ETA: Since the Jan 21 2021 patch, the default activated servo now appears as a human instead of Sara. 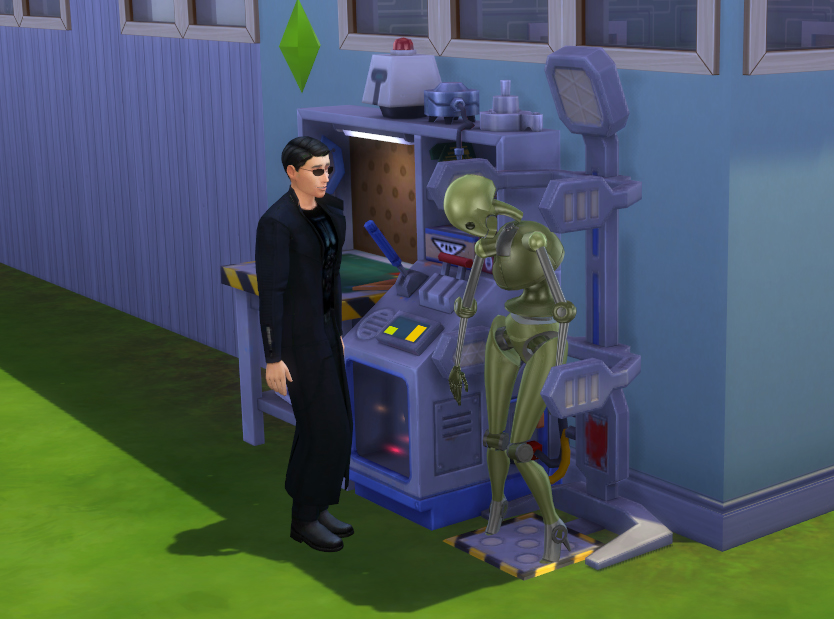 
ISSUES:
S.A.M., as those of you who have him will know, doesn't have arms/legs so interacts with everything by telekinesis. You have to suspend disbelief with him a bit.

The Plumbots have an issue with their feet often clipping into the ground. This is maybe due to their having extra-long feet and I didn't want to alter the mesh as I like them as they are, but I had to assign them to the Calf bone which makes them a bit better-behaved than Foot bones. It's not overly noticeable unless you really look closely. My already-uploaded Plumbot parts had the same problem, so if you have those, you'll be familiar with it.

Although I was able to remove the glowing eyes and brain VFX, they appear on the servo's HUD portrait and Mood portrait and I couldn't find out how to remove those. ETA: I've just been advised that removing the effects from the HUD/Mood portraits could conflict with other people's mods which alter those portraits. So, it's best to leave mine as they are.


For a look at them in game, here is a short video showing them in action, including in Hover mode in which the blue jets fit their new bodies fairly well, and the Plumbot feet-clipping-into-the-ground thing. They do seem to be rather fond of the beer keg, ha ha. Flirting with the typewriter is rather sweet too. (Please note that this video was made before the Plumbot neck fix, so disregard the moments where their necks detach from their bods.)

Finally and most importantly, a HUGE thank you to CmarNYC for advice on how to make a multi-meshed recolour package and helping with testing, and to MizoreYukii for advice on how to get rid of the unwanted glowing eyes and brain effects. I would not have figured out those issues without you and am sincerely grateful for your help!


Polygon Counts:
The default TS4 Servo is 14201 polys, which is relatively high, so these are a bit of an improvement on it:

Additional Credits:
Made with CAS Tools, Sims 4 Studio, Milkshape and Blender.
Other Information

Retired to move to Fallout 4 creation but I'll still check here for PMs or questions. Thank you to those who liked my Sims stuff, love all of you.
My Fallout 4 creations on Nexus: www.nexusmods.com/fallout4/users/38171995
More of my Fallout 4 items + also TS4 and TS3 items not uploaded here: http://colorfulcommonwealth.proboards.com/