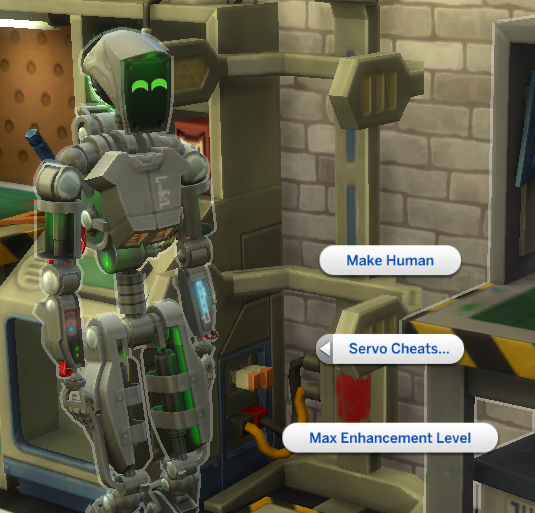 133 Thanks  Thanks     25 Favourited
UPDATE:
Due some users experiencing issues with the first version of the mod. I have updated it to rely on Scumbumbo's 'XML Injector' which can be downloaded at the SCUMBUMBO memorial site.

I have kept the standalone version up and labeled it as such for archive purposes, if for whatever reason you do not wish to use 'XML Injector', you can try this version, however, I will not provide support for this version anymore.

Do not use both the 'XML Injector Version' and the 'Standalone Version'.

Description:
A quick Pie Menu I put together to aid me in the creation of a 'Humanized Servo' mod, I thought I would upload it as I feel others may find it useful.

Essentially, it allows you to max a Servo's enhancement level or turn it human. The options can be found by clicking on your active Sim and looking for the 'Servo Cheats' button in their Pie Menu.

You can use this mod to change a human into a Servo, however, their head will appear under the mask if they are using certain make-ups or skin details (however these can be removed via use of the 'cas.fulleditmode' cheat. By default, only Young Adult Sims can turn into Servos and only if they do not have any traits that conflict with the main Servo trait. I have included a button that removes all conflicting traits should you still want to 'convert' them regardless of the stated issues, as well as an optional package that overrides the main Servo trait to allow it to be applied to Teens, Adults, and Elders.

Overidden Resources for Main Mod:
None


Do not use both the 'XML Injector Version' and the 'Standalone Version'.

Need more information?
Back to download view
30 Comments / Replies (Who?)