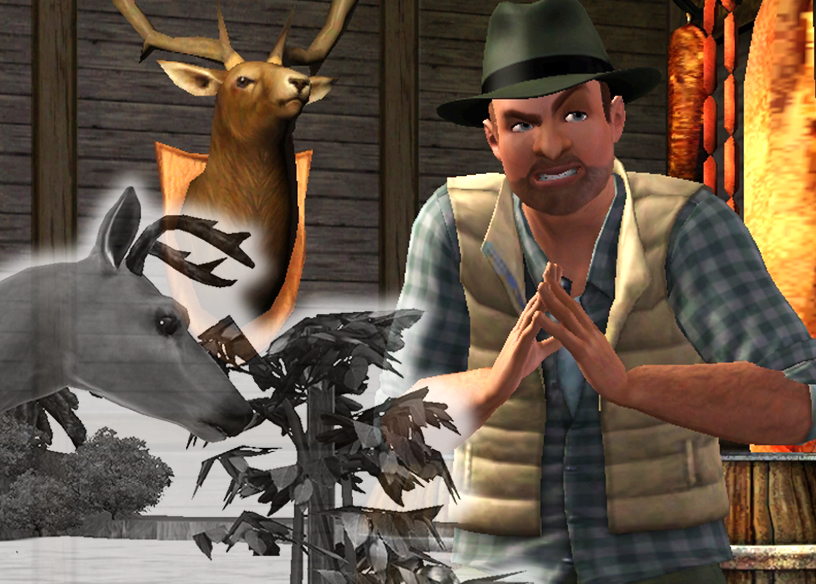 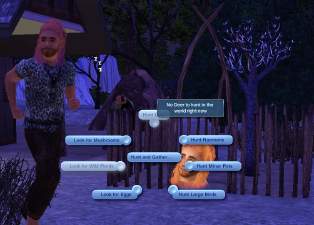 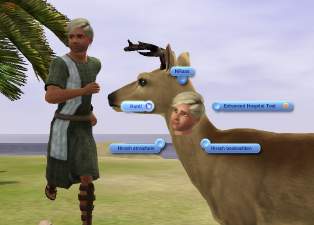 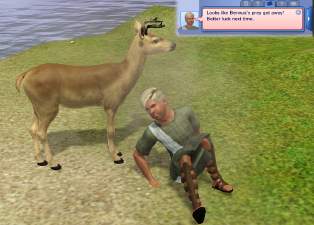 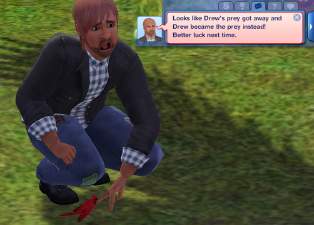 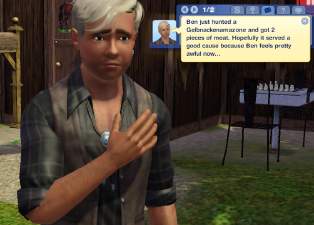 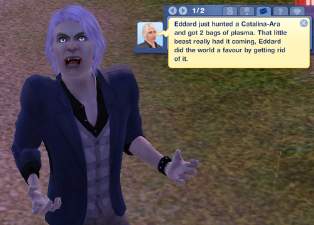 Are you tired of those annoying birds, rodents and reptiles roaming around in your sims' gardens and tormenting their fingers whenever they dare to go near them? Do you sometimes wish your sims could just make them disappear? Well, now is their chance to take revenge! Hunt those critters and take their meat–and maybe their friends will think twice the next time they are about to chew on your poor sim's finger…

Updates
Version 1.2
Updated on July 4th 2022
This is a Terrain interaction that shows up when you click on any Terrain located outside. It works similar to the Auto Collect mod and will automatically make your sims hunt any pets of the chosen type that are roaming around in the world. I also added a few gathering interactions to give your vegetarian sims something to do as well, sims can harvest wild plants (plants on residential lots will be ignored), collect mushrooms or steal eggs from birds.
The XML file included in the package now has separate tuning values for different pet species in the game, allowing you to change the ingredients that are added to your sim's inventory after hunting a pet. Adjusting it is pretty easy, for example if you want raccoons to drop Links and Patties instead of Steak, change the following line:
From: kRaccoonDrops value = “Steak”
To: kRaccoonDrops value = “Hot Dogs, Burger Patty”

Just make sure that the values you add are valid ingredient keys, if you are unsure about it, you can find them all in Sims 3/Game/Bin/Gameplay/GameplayData.package under “Ingredients”.
Version 1.1
Updated on May 28th 2022
Finally your sims can hunt deer and raccoons! Unlike minor pets, they will actually fight them and get the “Bitten” and “Humiliated” moodlets if they lose the fight. They will not be willing to hunt more deer or raccoons while having the “Bitten” moodlet. I'm not 100% happy with the fighting animation but it was the best one I managed to come up with that didn't look completely broken lol.

Note that technically, hunting a deer or raccoon won't completely destroy it but rather “reset” it and wipe its relationships clean. It will disappear for a while but might respawn back into the game at some point. I figured it doesn't really matter because they all use the same character models anyway and this way, your game won't be constantly spawning new wildlife when your sims decide to go on a hunting spree.

However, this is the reason why your sims won't be able to hunt wild horses, since they actually do use distinguishable character models, so the mod would ideally have to purge them MasterController total annihilation style, which I didn't feel like dealing with right now.
What it does
This is a pure scripting mod that adds a “Hunt!” interaction to all deer, raccoons and minor pets (birds, snakes, rodents, etc.) in the game. Sims will walk to the critter and try to “hunt” it. If the hunt is successful, a random amount of meat (usually steak, see below for other drops) will be added to their inventory. Depending on their traits they might react to the hunt in different ways. These reactions can be positive or very negative, a detailed list on which traits trigger which specific reaction is provided below.

Version 1.2 also adds a “Hunt and Gather...” Terrain interaction that makes your sims hunt multiple pets of the selected type in a row. This interaction will show up for sims child or above when you click on any Terrain that is located outside.

I got the idea for this mod when I was playing the Test of Time challenge. One thing that annoyed me was the fact that my stone age sims seemed to be constantly surrounded by wildlife, yet they could only eat fish to get their dose of proteins. This mod provides an alternative way for your sims to get meat without having to buy it at the store, particularly useful if you are playing in a historic setting.

How to hunt
The “Hunt!” interaction is only available for humanoid sims, so it won't show up for cats, dogs or horses. By default it is enabled for the ages child or above, though you can set the kAllowKidsToHunt tuning value to false if you don't want the interaction to show up for children. As of version 1.1, your sims can hunt deer and raccoons! The interaction works very similar to minor pet hunting but the animation is different and your sims will get more meat from a successful hunt. Children won't be able to hunt deer but they can still hunt raccoons.

The success of the hunt depends on your sim's WildLifeFriend skill. If the hunt is not successful, the critter will simply run away and your sim might get bitten. Hunting increases the WildLifeFriend skill, so if your sims keep trying, they'll eventually get better at it. If you don't want the skill to increase by hunting, you can change the kSkillPointsGained tuning value to zero.

Version 1.1 adds an autonomous hunting interaction for NPC sims with certain traits. However, they will not get any drops in order to prevent their inventories from getting filled up with meat. They'll also get a cooldown after getting bitten, so townies won't be constantly running around hunting minor pets on your community lots. If you want to turn off autonomous hunting altogether, you can change the kAllowAutonomousMinorPetHunting tuning value to „false“.

Drops
After a successful hunt your sims will get 1-2 ingredient drops which are usually steak, though certain pet species may produce different drops:Also, transformed Werewolves get a multiplier to the drop maximum which is 2 by default. Note that all of these values (including the ingredients as of version 1.2) can be adjusted via tuning. 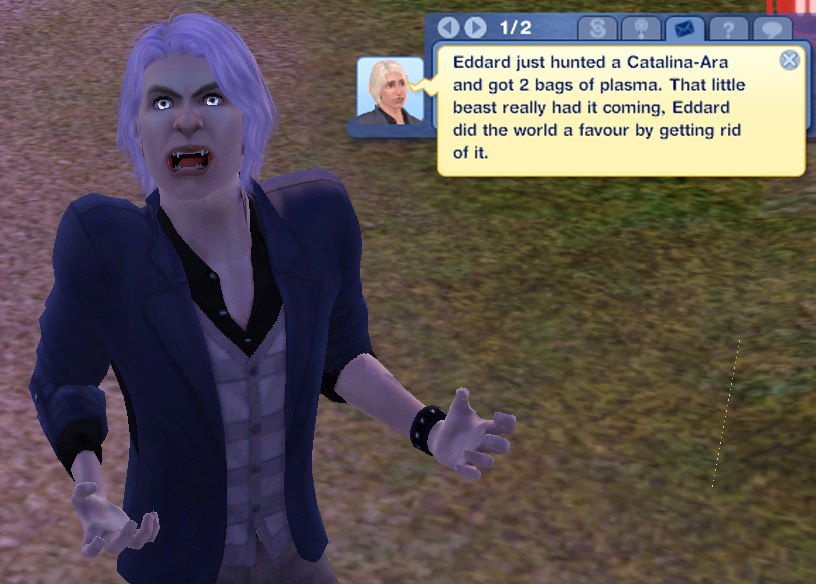 Hunting reactions
Certain traits may cause your sims to react to a successful hunt in different ways! So while hunting might sound fun to your evil adventurer sim, the same might not apply to his animal-loving vegetarian brother. While I personally think it's more fun to discover the reactions as you play the game, here's a full list for those who'd rather know in advance:

Heartbreak
This is the most severe reaction on this list. It will cause your sim's mood to go down by a lot, so think twice about which sims you send out to hunt. Your sim will cry and get the “Heart Broken” and “Upset” moodlets. Note that the “Heart Broken” moodlet lasts for 2 days and causes a -50 mood effect. Unlike some the other reactions, this one is not affected by the kChanceToGetTraitBasedReaction tuning value. It also takes priority over the other reactions, so your sims will always get it if their traits apply, regardless of which other traits they might have.
Traits: Animal Lover, Vegetarian, Child
Mood effect: Very Negative
Exceptions: Children who are evil, mean spirited, werewolves or vampires will not be affected. Vegetarian vampires won't be affected, either.

Life's not fair
Your sim will do an annoyed gesture and get an “Upset” moodlet. This reaction is meant for sims who don't like the idea of hunting but don't hate it enough to get their hearts broken.
Traits: Good, Friendly, Nurturing
Mood effect: Negative

So scary!
Your sim will shiver in fear and get a “Scared” Moodlet. Guess some sims just get paranoid about everything…
Traits: Coward, Neurotic
Mood effect: Negative

Fiendish Delight
Your sim will do an evil laugh and get a “Fiendishly Delighted” moodlet. This reaction is for sims who just really enjoy hunting small, innocent critters.
Traits: Evil, Mean Spirited
Mood effect: Positive

Thrill of the Hunt
Your sim will do a fist bump and get an “Adrenaline Rush“ moodlet. Hunting gets certain sims pretty pumped up!
Traits: Brave, Daredevil, Adventurous
Mood effect: Positive

So exciting!
Your sim will get an “Excited” moodlet. This reaction is not affected by the kChanceToGetTraitBasedReaction tuning value, excitable sims will get it each time after a successful hunt unless their reaction was negative.
Traits: Excitable
Mood effect: Positive


Tuning
The XML file included in the package has a bunch of tuneable values, you can adjust the drop rate, hunting success chance, turn off skill dependency and much more!


Compatibility
This is a pure scripting mod, so it should not cause any major conflicts. However, any mod that messes with the MinorPet classes or the WildLifeFriend skill might cause it to not work properly.

This mod was built and tested with patch version 1.67. Since this is a mod for minor pets, you will need the Pets Expansion Pack for it to work.

Note that this is my first scripting mod, so if there are any problems with it, please let me know!

Future work
Some stuff I'd like to add to this mod if I find the time:
Special Thanks
Other Information