Functional Fireplaces with Cauldron - Converted from The Sims Medieval 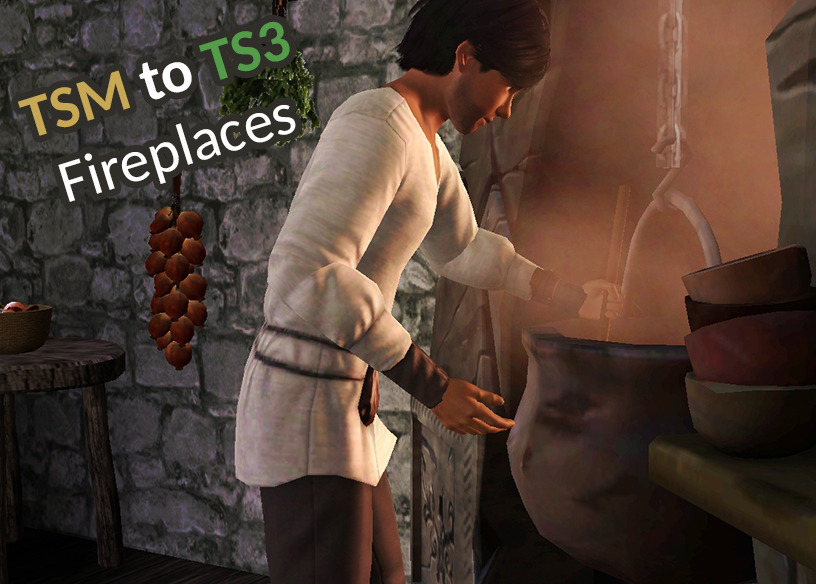 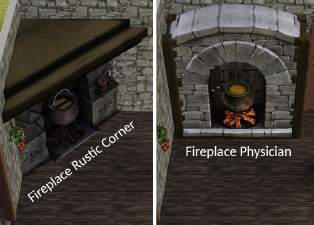 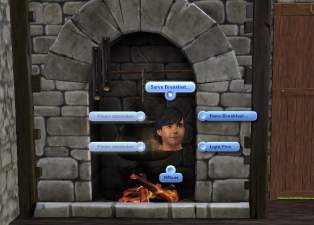 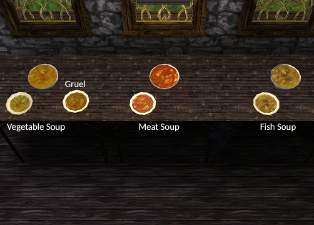 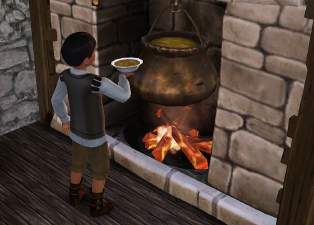 Created by spherefish View Policy / About Me View all Downloads  Tumblr

Version 1.0.2
Fixed an issue that caused this mod to conflict with the Set The Table & Call To Meal mod. If you had your interactions disappear, try the method I described here to fix it.

Version 1.0.1
I managed to fix the transparency issue, thanks to Naus Allien and the kind MTS staffer who approved this Download and suggested adjusting the shaders. If you already placed the object in your game, you will probably need to recolor it to get the fixed transparency.

I also added another flavor to this mod that can be enabled by changing the kUseFlavor2 Tuning value to “True” and is designed to work with ani's Woodcutter Tree mod. It makes the Fireplaces use the default “Light Fire” interaction (which is the one ani's mod overrides) and will require the fire to be lit in order for the cooking interactions to show up. That way, your sims will have to gather Firewood if they want to use the Fireplace for cooking. Thank you to echoweaver for suggesting this!
About this mod
Ever since I first played the Sims Medieval I fell in love with the Fireplace/Cauldron combo objects and thought it would be amazing to have them in the Sims 3 … and have them function just like they did in TSM. So here is my attempt to bring some of that medieval charm into your good old Sims 3 neighborhoods.

This download features two different Fireplaces that have been converted from the Sims 3 Medieval with modded functionality. These objects function as both Fireplaces and Stoves and use animations from TSM, so you will actually be able to watch your sims stir that cauldron. They use a custom recipe list that can be changed via Tuning (the default list only contains recipes that I thought would make sense to be cooked in a cauldron). I also included some new recipes that were inspired by TSM, though adding them is completely optional.

Disclaimer:
The original meshes, textures and animations were made by EA for The Sims Medieval. I only take credit for the conversion and the custom script.

How to Install
There are five different files in the ZIP, some of which are optional. Simply put the ones you need into your Mods/Packages folder.

The following files are REQUIRED:
TSMFireplace_Animations.package
(Contains the script and the animations. The objects will not function without this file.)
TSMFireplace_Physician.package
TSMFireplace_RusticCorner.package
(These files contain the converted objects. You will need at least one of them unless you plan to use the script for a custom object.)

The Fireplace
These Fireplaces function just like regular TS3 Fireplaces, however I did change a few aspects.
(NOTE: These changes ONLY affect the custom fireplaces that are included in this download and use the custom script, your regular fireplaces will not be affected.)
The Cauldron
The main purpose of these objects is to work like a stove-replacement. Cooking meals in the cauldron functions similarly to cooking them in a stove, your sims will gain cooking skill from it and will only be able to cook recipes that they know. Since the number of recipes that can be cooked using the cauldron is pretty limited compared to the stove, this mod ignores Mealtime flags by default (meaning your sims will be able to cook Spaghetti etc. for breakfast) – however, the interaction will still say “Have Breakfast/Dinner/etc.” You can enable Mealtime flags via Tuning, though I recommend against it unless you also change the kCookableRecipes List to include more recipes.

By default, this mod will not allow you to cook a recipe if you don't have the necessary ingredients, since that's how cooking functioned in TSM (basically like ani's Fridge mod). You can change that by setting the kAllowCauldronShopping Tuning value to “True”. While you don't need a fridge to use the cauldron, the mod will check the fridge inventory for ingredients if there is a fridge on the lot.

Leftovers
Each time your sims cook a single portion in the cauldron (selecting “Have” rather than “Serve”), the “remaining” 9 portions of the meal will be left inside as Leftovers. Sims (including children) will then have the option to select “Eat Leftovers” when they click on the fireplace to grab a portion of the previously cooked meal.

Leftovers will reset if all the portions are gone, if the cauldron is used to cook another meal or if you make a sim clean the cauldron. Leftovers can spoil if they are left inside the cauldron for too long (24h by default). Sims get disgusted by spoiled leftovers and are likely to clean them out autonomously.

There is a special “Eat Leftovers” interaction for children that shows up when the cauldron is empty, allowing them to get food even when no adults are around. They'll basically scratch out whatever is left inside the cauldron and get a default meal (which is canned soup by default, though it can be changed via Tuning). 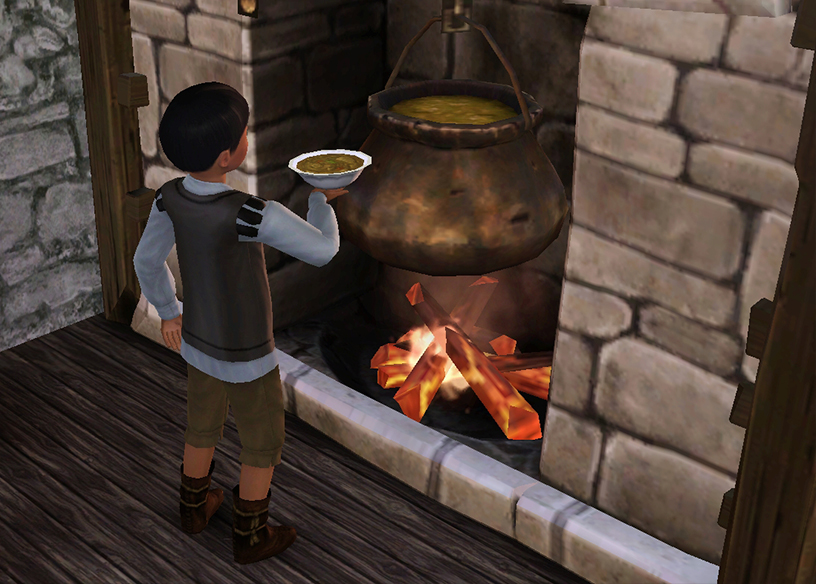 Recipes
This download comes with a few custom recipes for your sims to cook inside the cauldron, since the original list of cookable recipes is a bit short. They were all inspired by TSM Food and use (in some cases recolored) textures from TSM and TS3. 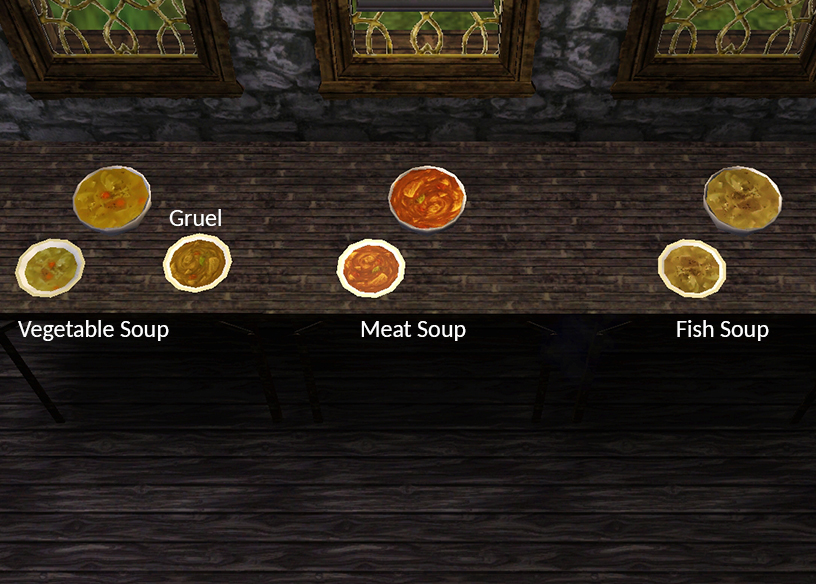 I did my best to translate the recipe names to all languages, however I had to rely on Google Translator for the vast majority … so if anything sounds weird in your language, I apologize in advance! Let me know if you'd like anything fixed.

Issues
I'll be honest, I'm not particularly skilled at meshing and object creation, so while I tried my best to convert these objects, the result isn't perfect. This should be fixed now!

Also, the animations may have some clipping issues, particularly for teenagers – they will just kinda stir through the cauldron walls. Unfortunately this can't be helped, since the original TSM objects and animations were not made with teenagers in mind.

If you notice any resets or script errors, let me know ASAP! I tested the mod pretty extensively but something might always slip through the cracks. As for Compatibility, there should not be any major issues since this is a scripting mod that doesn't interfere with existing functionality. However the new object script inherits from the Fireplace class, so any mods that mess with Fireplaces might cause it to not work properly.

Tuning
You can find the Tuning XML in TSMFireplace_Tuning.package.

Future workThe cauldron fireplaces were actually not the first functional TSM objects I tried to convert, my first try was one of the thrones which turned out to be very frustrating. However, I still hope to complete that project at some point in the future, as well as a few other objects I have in mind.