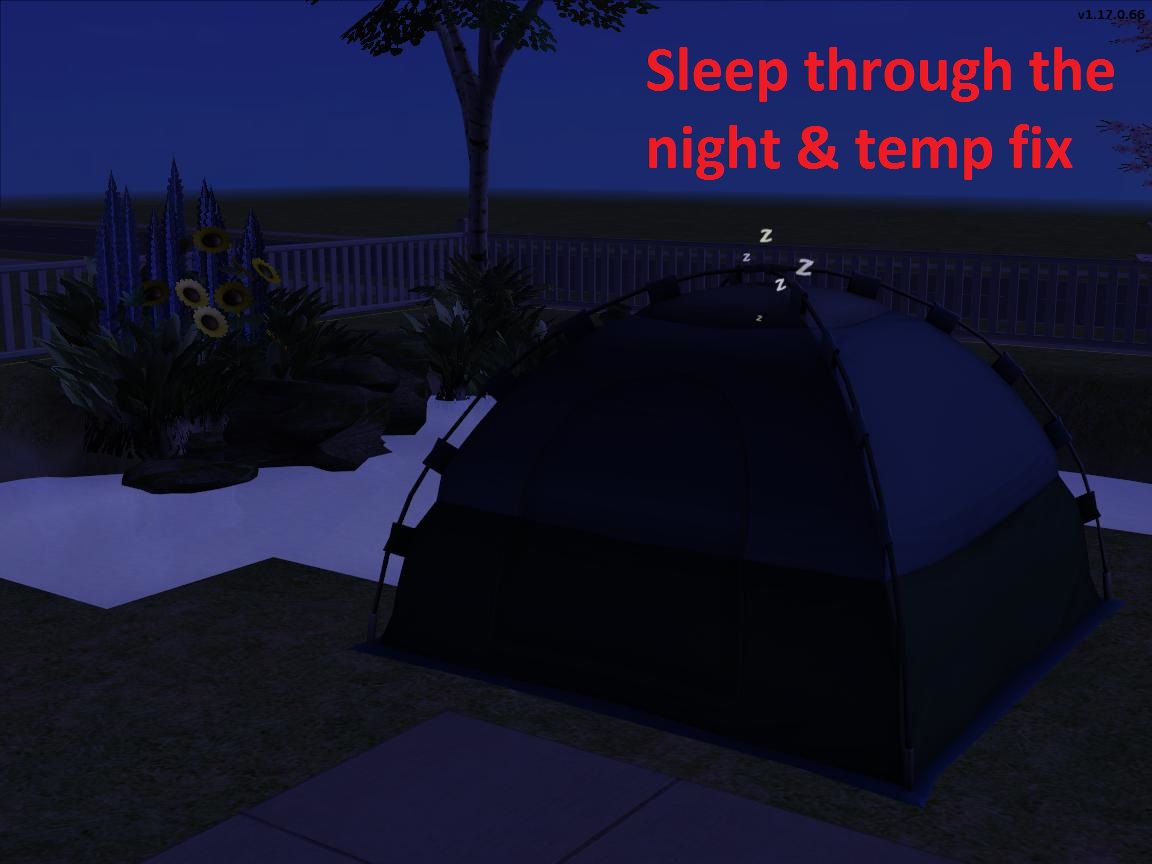 Created by gummilutt View Policy / About Me View Downloads Home

A while back Phantomknight posted looking for a mod that would let Sims sleep through the night in tents, as they do in beds. I made one for her, but hadn't planned on uploading. But then gdayars released her Teen Vacation Mod with Tents Enabled-mod and I thought it would be nice share this mod to celebrate that teens can now go on camping trips all on their own. And to make those camping trips slightly less miserable I decided to also incorporate ihatemandatoryregister's wish that tents would help shield the Sim against the outside temperature.

What does this do?
With this global mod, Sims who fill up their energy meter while sleeping in a tent at night will not wake up until 6am. If they fill it up before 10pm they will wake, but between 10pm and 6am they remain asleep. As with beds they will get up if you queue another interaction, or something else wakes them. But if the only reason to wake up is that energy is full, they remain asleep.

In addition, sleeping in a tent will help normalize the Sims body temperature. Temperatures range from 100 (overheated) to -100 (freezing). 0 is comfortable level. This mod makes Sims drop 50 points or gain 50 points depending on if they are hot or cold. They will not go over 0, so if the Sim is less than 50 from 0 it will set them to 0. The reason I decided to only make tent help temperature to some extent is that I don't think tents fully shield you to the weather. If you were frozen solid you will be less cold in the tent, but you aren't going to be warm and cosy. And if it's hot outside it's going to be hot inside the tent too so getting away from the sun is only going to help a bit.

Conflicts
None that I know of. Will only conflict with mods that affect the code to sleep in tents.

Does not conflict with Inge's sleep later patch. Sleep later patch will have no effect on tents. This is because Inge only modified the code used by beds, and tents have their own code.

Variations
I debated making versions with only sleep through night, or only temp fix, and also one that fully resets temp. But in the end I decided not. I love giving you guys variety and the option to get exactly what you want, but I also don't want to confuse you with lots of files and information. So I decided to stick to the one version, and let you guys tell me if you want variations. So if you like this but would want only sleep, or only temp, or better temp reset, let me know and I will make it when I have time

Credits
Phantomknight and ihatemandatoryregister for the idea. Phantomknight for testing the first version of this mod.
Peni_Griffin who confirmed sleeping until 6am is vanilla behavior
Insimenator that I looked at to figure out how sim temps work