Color options for the Elixir of Life 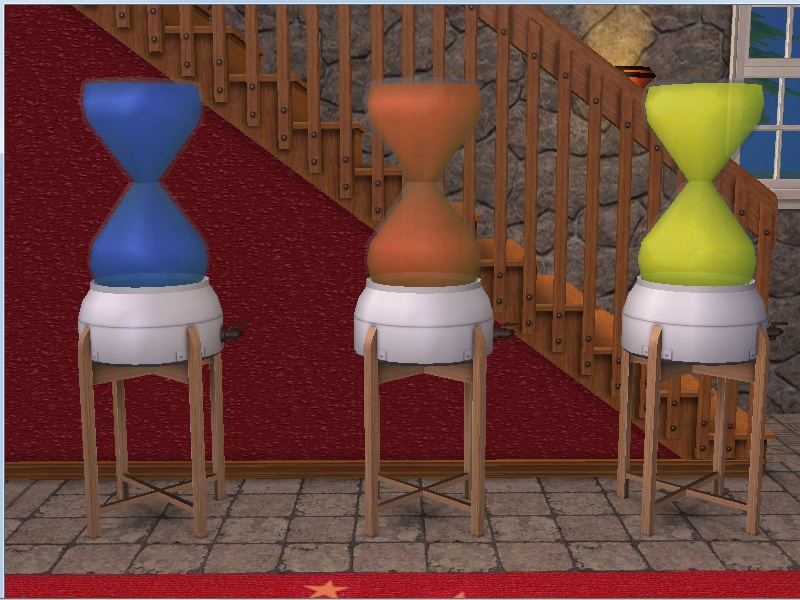 39 Thanks  Thanks     8 Favourited
This is a Maxis Recolour which means that it is a recolour of an item that already exists in your game. Please check the Expansion pack requirements to see which game pack it recolours.

This is tagged as a Maxis recolor because these packages use a Maxis mesh, However, they are clones of the Maxis Elixir of Life aspiration reward, and will appear next to it in the Aspiration Rewards panel. If all three are installed, they should sort blue, red, yellow. Please note that they are not fully standalone objects. Their shadows and stands are repositoried to the Maxis original, and I've linked them to the GMDC resource for the Maxis original. As a result, the packages are rather small, especially after being Compressorized. Unlike the liquid, the stand is recolorable, so if you have any recolors of the stand, the clones will pick them up.

There are two versions of the clones, so be sure that you only use one.

The main version has code that is specific to zombies, vampires, and Servos, and therefore requires OFB or higher. The version tagged "BGcompatible" has been reverse-engineered by copying resources from the base game's objects.package and using them to replace non-BG resources in the clones. I've followed the checklist for making objects base game compatible, but I don't know that they will work with just the base game. AGS doesn't get along with SPs installed from a compilation, so I can't test them in a base-game only environment.

Both versions of the clones have been checked in-game, and behave the same as the Maxis elixir. When buying the Elixir of Life, they allow you to choose blue, red, or yellow liquid, in addition to the Maxis green. However, while they give you extra options, they do not allow you to recolor the liquid with the Design Tool. As with the Maxis object, the liquid will not appear until they are placed in-game; the liquid is not visible in their catalog thumbnails or in their preview images, except for a spot at the bottom of the glass portion, where it meets the stand. As long as you stay in the Aspiration Rewards panel, you can change your mind by using Undo and then selecting a different color. However, once you leave the Aspiration Rewards panel after placing the Elixir in-game, you cannot change the color of the liquid.

I was able to register a GUID block, but given the age of the game and the sheer amount of content that has been created for it, I can't be certain that the GUIDs won't conflict with something that's out there somewhere.


Additional Credits:
Maxis, for the original object.
simmer22, for advice and information.
Pideli, for prompting me to think of this.

This checklist for making objects Base Game compatible.