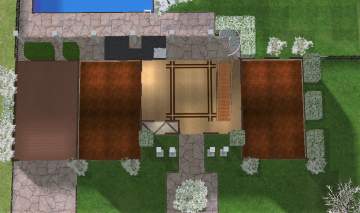 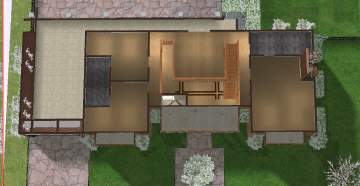 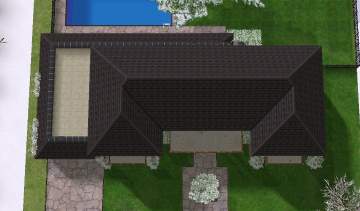 906 Downloads 55 Thanks  Thanks 11 Favourited 3,450 Views
Created by MatthewD
View all Downloads
Uploaded: 9th Sep 2020 at 2:09 PM
Updated: 9th Sep 2020 at 9:37 PM
This is potentially my only English themed home that I'm completely happy with. I've always struggled with creating Georgian style English country homes in The Sims 2, due to the limitations in brick and window options. This was actually inspired by a home near me in Hertfordshire, England that I drive by frequently.

Where I believe the game restricts building Georgian homes, is that the beauty of old English homes often lies in the brick and window detail. In order to create character, I've actually used several shades of bricks for this, mixing a more polished wall decor with an aged/older style. You can see this up close, but I have used the plants and pillars to try and make it less obvious at full view. Although the shape of the house is simplistic, I love the use of the pillars and front balconies. These give it a grandness and allow the house to look classic and more impressive from the exterior.

My favourite feature is the outside deck on top of the garage. Initially this was a flat roof, but I added the sloping roof around the side and rear later, as I felt something was missing. I actually like the rear view of the house nearly as much as the front and feel it looks like a typical English country house.

Initially, I didn't want to give the house a Gothic finish, however struggled with finding the right railings to surround the garden and balconies. Due to the dark brick and roof, it made sense to go with this.

The interior is grand but simplistic. It made sense to keep the downstairs symmetrical and create a large hallway. The upstairs includes a landing to surround the downstairs hall, however this could be modified in order to accommodate additional bedrooms. Currently it has three bedrooms and two bathrooms (excluding a downstairs toilet). It costs $47,606 unfurnished.

Given The Sims 2 is an American game, I do feel like this house is unique to the pre-created lots, considering the majority are American Cape designed. Hopefully this attracts any lovers of English country homes.

Number of bedrooms:
3 Bedrooms
Custom Content Included:
None: No Custom Content included
Furnishings:
Unfurnished: Lot is a basic shell with walls, floors, windows, doors, stairs, and landscaping, but does not contain basic fixtures, plumbing, or furniture.
Special Flags:
Not Applicable