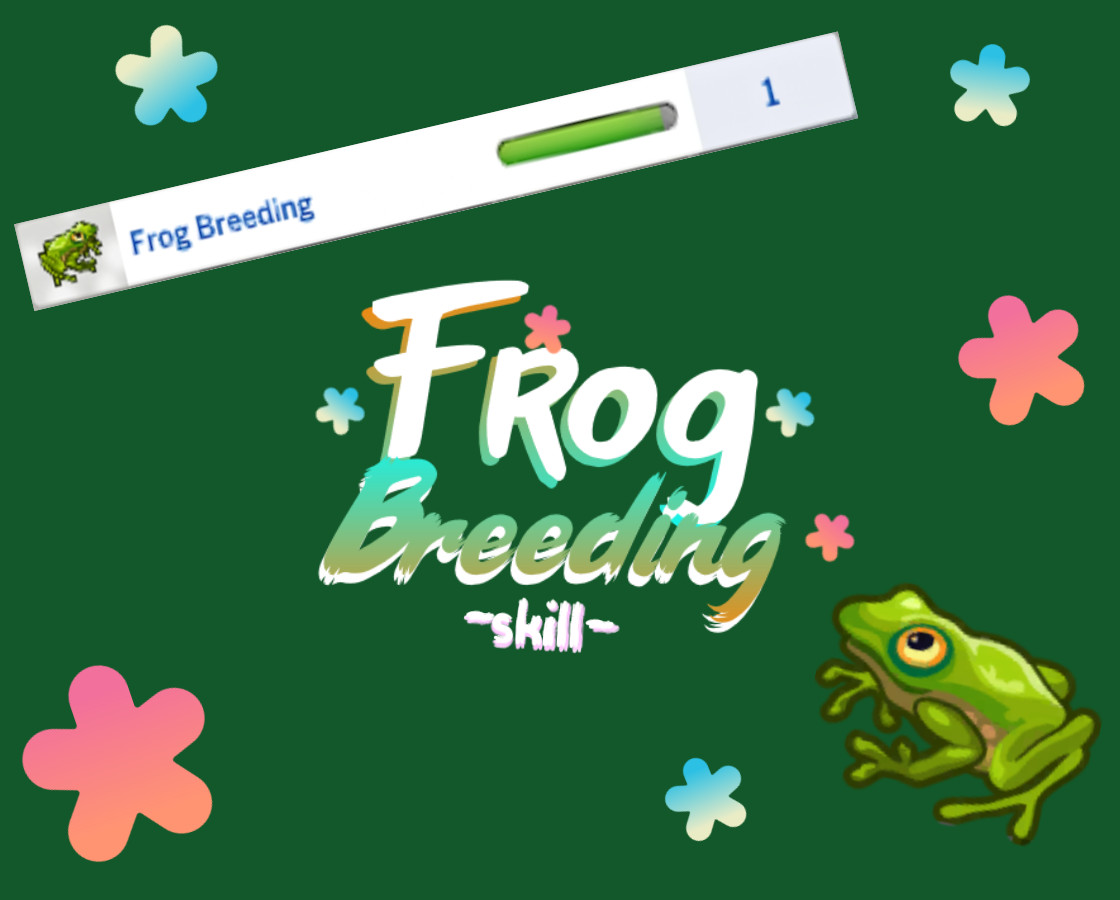 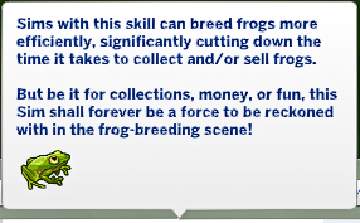 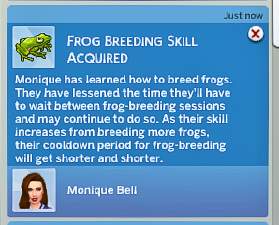 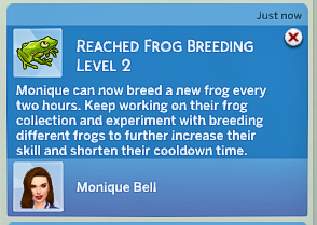 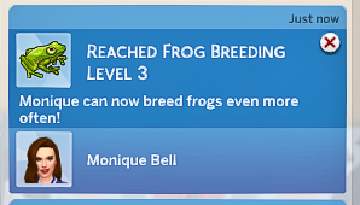 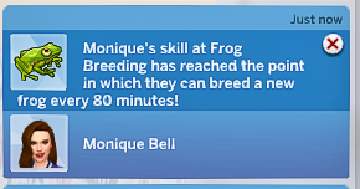 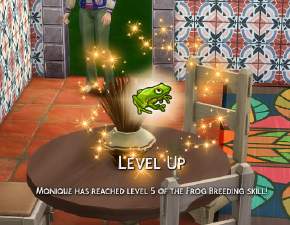 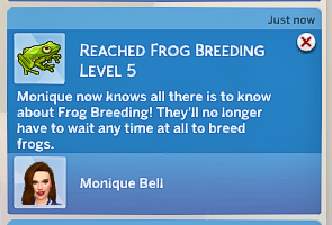 
"Why?" Well, for once, this was kinda requested, if by requested you mean I took someone's indirect request, did it, then got a bit carried away and made a completely different mod separate from what they were looking for in the first place. In case anyone's wondering, I started by trying to remove or shorten the cooldown, and then it might have slightly escalated.

Okay, so. Ever wanted a Frog Breeding skill? Me neither, but breeding frogs seems to be all the rage nowadays. I hear there's a scenario or something, it might have gone a bit over my head. But let's be real, Sims gain skills all the time, and not all those skills are necessarily the best things out there. So.

Presenting: a Frog Breeding skill! Yeah, it's just that. A five-level skill for your frog enthusiasts, complete with game effects when it comes to, quite specifically, frog breeding. But first, let's get into the details.

Possibly-excessive description of how the frog-breeding cooldown normally works in the game:

Okay, so. When you breed a frog, it isn't like those other cooldowns where you get a buff and have to wait it out for a set amount of time, though since it works to the same effect it kinda looks like it at first glance.

But no, it works via a hidden commodity (think like, your Fun need, except instead of spamming tense moodlets, when it's at 0 it lets you breed frogs). It's called Commodity_Frogs_FrogBreedingCooldownForSim.

Every time you breed a frog in the base game, a loot runs that sets that hidden commodity to 100, acting as a cooldown.

The commodity decays at a rate of 0.5 per Sim minute, leaving you with a cooldown of around 200 Sim minutes per frog you breed.

Basically, to perform the breeding interaction, that commodity has to be at 0.

In case you want a TL;DR of that, basically: the cooldown for breeding frogs is actually a hidden stat going from 0-100 that decays at 0.5 per Sim minute, it has to be at 0 for the breeding interaction to be available to you, and on top of giving you a frog, breeding frogs sets that stat to 100, which is what gives you a cooldown til its back to 0.

With that out of the way, let's talk about this new Frog Breeding skill that I'm taking way too seriously!

In short, the more skilled at Frog Breeding you become, the shorter your cooldowns will be, and if you max it, you can get rid of cooldowns altogether... Though it'll take so many frogs to get to that point, I'm not sure why you need this many frogs, but I don't judge.

Breeding frogs will increase your skill little by little until you reach the max level.

Note that that last one works by setting the hidden statistic to minimum, aka 0, rather than changing its value as the rest of them do.

Now's the part where I talk about compatibility and stuff, I suppose.

On top of the skill system, this loot is changed.

the overriden XML was:
loot_FrogCollectible_ResetBreedCooldown

That's the one that originally set the hidden cooldown statistic, Commodity_Frogs_FrogBreedingCooldownForSim, to its maximum (100) every time you bred a frog. Now, rather than do that, it gives you a small dynamic skill gain so long as you're beneath level 5, and sets the cooldown to the corresponding time for your current Frog Breeding skill level.