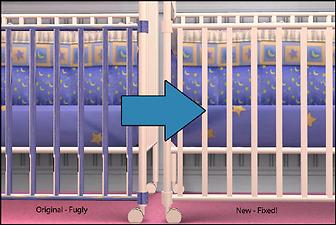 52,049 Downloads 1,814 Thanks  Thanks 269 Favourited 129,377 Views
Picked Upload!   This is a picked upload! It showcases some of the best talent and creativity available on MTS and in the community.
Personal Picked Upload! This is a personal favourite of the creator!

I saw BasketballGirl_35's "Nurseries to Match Maxis Bedding" set and at first I thought she had slaved the crib bedding to the "regular" bedding, but after reading I found out that it was a Maxis recolor. I was surprised to see that nobody has ever slaved the baby furniture to regular bedding, so I thought to myself: "Man, don't you realize how useful this would be if you made something like this," And so I did. Here is my "Inspiration":

Everything else is in its own slave. I.E. the crib will keep its original texture even though the fabric parts are slaved to the regular bedding.

Known Issues
You will probably have problems with the darn top of the diaper dispenser if you're nitpicky about things like that. I'm cosidering making a few recolors so that it will match better with everything. Another issue, it's bedding mapping on a few completely different objects. You'll run into issues with some bedding on the highchair, especially if the texture is, "complicated," or "stripey-ish" but a majority of the beddings work really well on the high chair and the other objects. I would reccomend looking at my "shopping list" for some reccomended items that look like they would work well with these new cribs and such so that your highchairs won't look wonked out with some of the textures.

But wait, there's more!
Even if you decide not to download the NON-default version of my cribs (or the default replacement bedding) it is HIGHLY RECOMMENDED that you download my crib UV mapping fix (if there isn't one?). Ever notice that the front of your babies' cribs are the shade of whatever the original crib bedding is? That's because EA forgot to map the crib properly. For nearly 6 years this has gone unchanged. 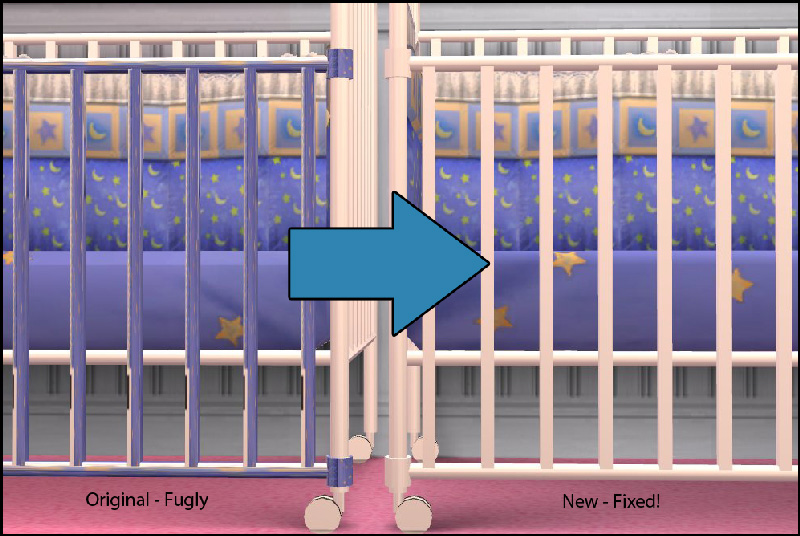 Note: Only download fway-CribMapFix-DEFAULT.zip if you are NOT downloading fway-MaxisBeddingOnCribs-DEFAULT.zip.

Will there be a FreeTime version?

I've fallen into the realm of the Sims 3.

If you decide to download HugeLunatic's "Gingham" bedding, I suggest downloading "The Gingham Rocking Horse" by CTherese.

For those who mesh, you may use the "bedding" group in the GMDC as a base if you need to. It does not belong on any paysite or the exchange, still. Credit would be appreciated, however, but not necessary.

Additional Credits:
-Big thanks to basketballgirl_35 for the idea from her Nurseries to Match Maxis Bedding sets.
-The creators and devs of SimPE - Everyone in #create, thank you for your recommendations.
- Phaenoh, the idea about making the highchair cushion not so floodfilly was a great idea.

Policy:
Anything that I have made, whether it be a mod or a piece of CC to plop in your Sims' homes, my policy is that you may do whatever you'd like with the stuff I post as long as it remains free. I no longer consider the things I make to be mine, they now belong to the community! I don't own EA code. lol So if you'd like to see how I did something with these mods or CC, feel free to poke and prod away.