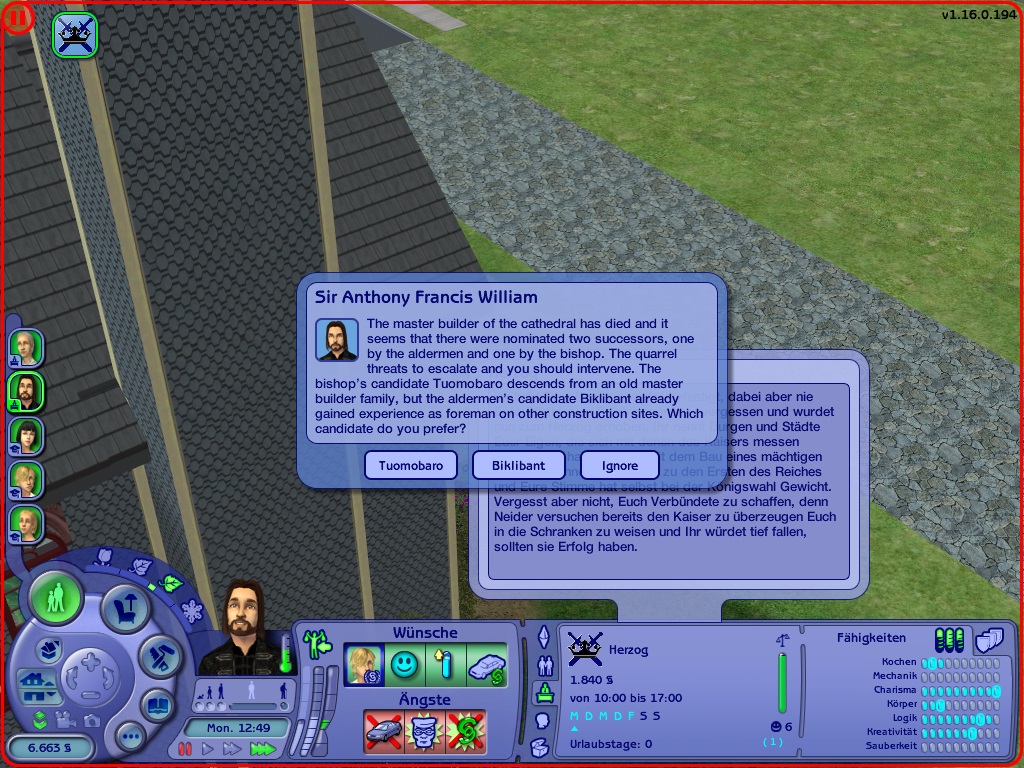 edit: I fixed the icons for all my careers. Thanks to lientebollemeis for showing me how.

The career is based on the Holy Roman Empire of the 13th century, so King and Emperor refer to Roman-German monarchs, but it should also work for other realms, like the Kingdom Simland or whatever.

I know that there already exist some nobility careers but they're just simple lists of titles, sometimes even in the wrong order, and most of them start with peasant, what makes it very incredulous to become a king or just a lord. So this is in fact a medieval career that could have happened, maybe not for one person, but in two or three generations and except the fact that I've added female job titles, so that, if you don't care about authenticity, your female Sims can discover this career, too.

All levels have chance cards. The complete career is now available in German and English. Questions, comments and corrections are very welcome. I hope you like it.

As the medieval society was not that open it is hard to reach the top of this career, but the rewards are great.

Teen
1. Page, Mo-So, 4pm-8pm, $ 45
In fact you're already a little too old to be a page, so you'll have strain even more to cope with your degree. Your father sent you to the court of a befriended knight, so that you learn courtly dealings and nobility ceremonial. Be attentive not to spill any wine while refilling and don't approach the higher nobles.

2. Squire, Mo-Sa, 3pm-9pm, $112, Requirements: 3 Body, 1 Charisma, 2 Cleaning
You're a squire now and you got your first short sword. You're now being taught in fighting and have applicable duties. Help your lord to don his armour, maintain his weapons and take care of his horse. If you can proof yourself, you may accompany him to tournaments and battles, maybe you can even participate in the bohort.

3. Knight, Mo-Sa, 4pm-9pm, $ 190, Requirements: 6 Body, 3 Charisma, 1 Creativity
You exceled yourself by bravery and faith and were knighted. As you're not the firstborn son of your father, you can't hope for a heritage, so start thinking how to make your living. Tournaments seem to be a good way, as long as you win, and the following banquets aren't that bad as well, especially as the girls get prettier with every cup of wine or meat.

Adult
1. Nobleman, Mo-Sa, 10am-4pm, $ 100
You're of noble blood or got ennobled for special merits. You have a small income and could live with it but not more. Your father can't leave you anything or maybe you're not the firstborn. In every case, you have to take care of your earnings, yourself, if you want to improve your lifestyle.

2. Knight, Mo-Sa, 2pm-9pm, $ 350, Requirements: 6 Body, 3 Charisma, 1 Creativity
You decided to leave your home and earn your bread in jousting. Actually, you're quite successful and the emperor himself made you an imperial knight. Loot and ransom yield much but you shouldn't waste all your money for mead and women, if you ever want to save enough to buy some land.

3. Baron, Tue-Sa, 2pm-7pm, $ 550, Requirements: 8 Body, 5 Charisma, 2 Creativity, 2 Logic, 1 Friend
You saved enough silver to buy a small area with granges and serfs. Luckily the former owner was hopelessly indebted and had no choice but selling to come into money as fast as possible. Invest your remaining savings into more workforce or good seed and hope for mellow winters and maybe you can raise the funds to build a castle on your land.

4. Viscount, Tue-Sa, 10am-5pm, $ 750, Requirements: 6 Charisma, 4 Creativity, 5 Logic, 2 Friends
Construction is doing fine. Although the workers moan under the burden of the cuboids and would probably prefer to work on their fields and not on your construction site, they recognise the benefits of a mighty castle nevertheless. You were already able to repel two attacks of robber knights and protect you peasants behind the first completed walls. The emperor made you a viscount, what means that you have to sustain him when he comes to this area. Hope that he doesn't come because he really doesn't travel with small following and would heavily burden your vault as well as your pantry. In the meantime you should try to arrange a beneficial marriage.

5. Count, Mo-Fr, 11am-5pm, $ 1150, Requirements: 7 Charisma, 5 Creativity, 6 Logic, 3 Friends
You were able to increase your property and marry a daughter of good family. Your now deceased father in law had no sons and the emperor agreed to enfeoff you his county. Luckily, your young wife is also beautiful what will ease it to beget a worthy successor. Although the emperor officially reenfeoffes the fees the empire's nobility managed to strengthen their position and make property and title heritable.

6. Marquess, Mo-Fr, 10am-5pm, $ 1370, Requirements: 8 Charisma, 6 Creativity, 7 Logic, 4 Friends
You extended your influence beyond the empire's borders and the emperor made your territory a margravate. Your first duty is now to secure the empire against outer enemies and in the case of an attack bring the counts together to lead them in the battle.

7. Duke, Mo-Fr, 10am-5pm, $ 1840, Requirements: 9 Charisma, 6 Creativity, 8 Logic, 4 Mechanics, 5 Friends
You consolidated our position but never forgot your duty to the empire and you were made a duke. You call castles and cities your own that can compete with the emperor's and recently started with the construction of a mighty cathedral. You're among the first of the empire and your vote has weight even concerning the election of the king. Don't forget to make allies as begrudgers already try to convince the emperor to put you in your place and you would fall deep, should they be successful.

8. Archduke, Mo-Fr, 11am-5pm, $ 1930, Requirements: 10 Charisma, 7 Creativity, 8 Logic, 5 Mechanics, 8 Friends
Nobody really knows what an archduke is, but you have the feeling that you deserve this title and sign your deeds with it. It now has the appearance of a plea when the emperor demands your military service. With your power grows your ambition and you next goal is to become a king. You could try and buy a foreign kingdom or you start negotiations with Rome to create an archdiocese in your territory, as your own archbishop could easily crown you king. Poorly you can't become king of the actual empire as the emperor enjoys best health.

9. King, Mo-Sa, 10am-6pm, $ 2240, Requirements: 10 Charisma, 8 Creativity, 9 Logic, 6 Mechanics, 10 Friends
You made it and became a king. This position brings great power and reputation but also man duties. Commit your vassals to you but don't let them become too mighty and find fitting partners for your children. If you can complete the construction of the cathedral before your death, the world will remember you forever.

10. Emperor, Mo-Sa, 9am-7pm, $ 2510, Requirements: 10 Charisma, 10 Creativity, 10 Logic, 7 Mechanics, 12 Friends
The emperor died and his only still living son was killed at a hunting accident even before the message of his father's death could reach him. The rulers of the empire came together and elected you to be their new king. As fast as possible you started your travel to Rome for the crowning as emperor. You have the highest power on earth and only God the almighty stands above you. You promised the pope to finally wrench the Holy Land from the infidels' hands but before actually starting a crusade, you should ensure that your power at the empire is absolute stable. If you can actually win the crown of Jerusalem, your glory will last forever, although or even because some say that a new king of Jerusalem would be the first hint on the Last Judgement.

A6. Marquess
Word reaches you, that some border villages were attacked. Do you want to call the counts to the weapons or can you handle it alone?
Call the counts
- You concentrate the counts and start your march. You have barely left your castle as your scouts report a huge hostile army, marching to your direction. You send envoys to the dukes and the emperor and prepare for battle. As the emperor's men arrive, you already wiped out the enemy's vanguard and together you can fight the whole army back. The emperor is very impressed and rewards you with more fees.
- You concentrate the counts and start your march, only to discover that a single grange was looted by a fistful of bandits. You wipe them out but the counts are not happy that you wasted their time. You lose two charisma points.
Fight alone
- You concentrate some of your best men and ride to the village that was looted. After some investigations, you find a bandits' hide out in the forests and wipe them out, earning one logic point.
- You concentrate a few men and ride to the empire's borders, to find there a huge hostile army. You retreat as fast as possible and send envoys to the emperor. He can finally fight the enemies back but they caused huge damage far behind the empire's borders. You didn't fulfil your duties as marquess and lose your privileges.

Description: You’re of noble blood or got ennobled for special merits. You have a small income and could live with it but not more. Your father can’t leave you anything or maybe you’re not the firstborn. In every case, you have to take care of your earnings, yourself, if you want to improve your lifestyle.

Description: You’re of noble blood or got ennobled for special merits. You have a small income and could live with it but not more. Your father can’t leave you anything or maybe you’re not the firstborn. In every case, you have to take care of your earnings, yourself, if you want to improve your lifestyle.