Get to Know Fix 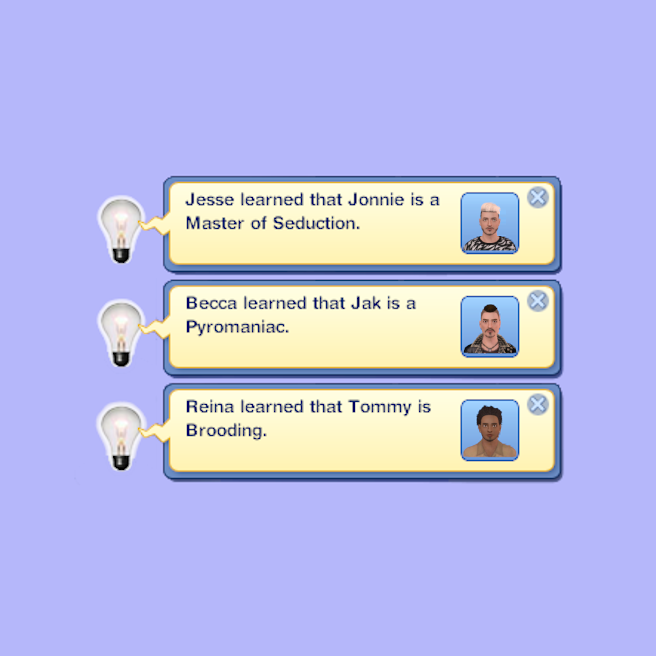 Description
This is a pure script mod that incorporates a host of tweaks revolving around the Get to Know mechanic of the game, including fixes for broken Get to Know code and enabling more discoverable traits. The mod also allows for a great deal of flexibility with quite a few tunables, so you can adjust the mod's capabilities to your preferences. See Tuning below for more information.

Though this is just one package file, I will be dividing the description of the mod's functionality into two categories for clarity's sake:

Get to Know Fix
This part of the mod fixes an EA mistake that makes it nearly impossible for Sims without the Charismatic trait to discover another Sim's traits via the Get to Know interaction, and adds some extra details. It incorporates the following features:
More Discoverable Traits
In the vanilla game, there are series of traits that Sims are not able to learn from socializing with another Sim. While mods such as Trait Discovery Fix already aiming to fix that exist, they come with the disadvantage that when your Sim learns these traits you'll be displayed an empty notification. This part of the mod aims to remedy both of these issues, and then some.

The More Discoverable Traits part of this mod expands upon which traits your Sims can learn about one another through socialization and includes new text strings that'll show up when your Sim learns one of these newly available traits, so you'll never see an empty notification when they do.

Keep in mind that this mod neither makes hidden traits visible nor does it give Sims reward traits automatically.

Tuning
You can customize many of the features of this mod by opening up the .package file in S3PE to find the Tuning resource and using a text editor to modify any of the following fields:

Other languages will display the text in English.

More translations are always welcome and appreciated — if you'd like to translate this mod, you can use this short guide to get started: