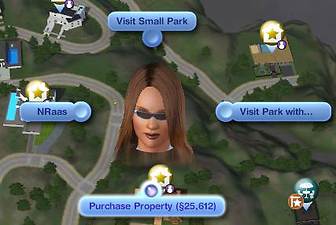 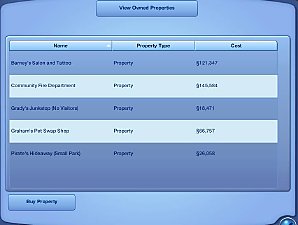 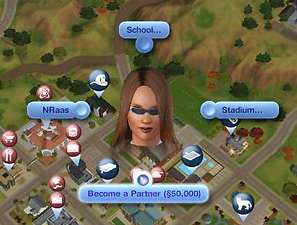 UPDATE 19/10/13 - Both versions of the main mod have been updated for Into The Future/Patch 1.63 which should allow the following 10 venues:

to be purchasable and owned by active Sims. No update is required for the extra mods that make the Combo School/Stadium in Appaloosa Plains and the Arboreturm in Moonlight Falls investable.

UPDATE 18/8/13 - The two versions of the primary mod have now finally been updated for Island Paradise/1.55 and have had the following changes applied:

5th Update 05/09/12 - I have added a 4th .package file that allows the new Arboretum rabbithole that can be found in Moonlight Falls and the Supernatural expansion pack to be invested into. Becoming a partner costs $1,000 and buying it out entirely costs $8,000. The amount of earnings per week remain at EA defaults with $50 per week for being a partner and $200 per week when owning it entirely (check compatibility below for which XML file this extra .package edits).

4th Update 04/09/12 - I have replaced the main mod and the no Pet Store version with a new version (make sure your .package has +MiscLots on the end of it and if you're using an older version, replace it if you have installed Patch 1.38) that makes the following changes:

- A breakthrough I inadvertently discovered while updating this mod: Miscellaneous Visitors Allowed and No Visitors Allowed Venues can now be invested into. Everything from small walkways like Civic Plaza in Bridgeport to even OFFICIAL STORE VENUES like The Lucky Simoleon Casino (as pictured), Serenity Retreat from the Gold Version of the Store World, Sunlit Tides and the Regency Arcade. Basically, pretty much everything with a blue park bench icon that you couldn't invest into before can now be invested into (with the exception of the Big Show Venue icon for Stadiums and Theatres in Showtime as they're not technically venues, but rather just Rabbitholes with a shell). With this change, it means that now virtually every non-rabbithole community lot can now be invested into; and

- Includes the new code from EA that allows for Performance Clubs/Smaller Live Show Venues and Private Venues to be invested into (something EA didn't do with Showtime and required me to put in manually prior to now) as well as EAs code to enable investing for the two new non-rabbithole venues, Werewolf Bars and and Potion Consignment Stores.

Fire Stations, Salons, Junkyards, Junkyards (No Visitors), Small Parks and Pet Stores (which came with the Limited Edition version of Pets) can still be invested as normal and the separate file that enables the School/Stadium Rabbithole in Appaloosa Plains works as normal and didn't require an update.

If I discover any more venues and rabbitholes that can't be invested into like the Arboretum (will need to confirm this when I get the game in a couple of days time), i'll add an extra file that allows whatever rabbithole to be invested into as required.

3rd Update 05/11/11 - Now attached a separate, optional .package that unlocks the ability to invest in the combo School/Stadium in Appaloosa Plains (Pets Expansion Pack World) that for some reason was set to not allow investing. Becoming a partner costs $50,000, buying out the rabbithole entirely costs $112,000 and the amount of earnings per week are at EA defaults for the Stadium alone, $13,000 per week for being a partner and $15,000 for owning the School/Stadium. UPDATED 03/11/11 - Now includes ability to purchase "no visitors allowed" Junkyards in addition to your standard Visitors Allowed Junkyards (this is particularly useful in Twinbrook where there are two Junkyards with one being set to no visitors allowed) and the Swing requirement to upgrade to level 3 for Small parks has been removed to make it easier to upgrade tightly fitted "Visitors Allowed" lots like Civic Plaza in Bridgeport following changing to them to a Small Park in edit town so you can purchase them.

This is my first attempt at a tuning mod. Since the release of Ambitions, I've found it particularly annoying how you've been unable to purchase the new lots in Ambitions (i.e. the Fire Station, Salon and Junkyard). I also discovered at this time that you could not buy Small Parks either (only Big Parks) and if you acquired the Pet Store register and Pet Store through the limited edition version of the Pets expansion pack, you are unable to buy the Pet Store either.

This tuning mod allows you to invest/purchase the Fire Station, Salon and Junkyard (Visitors and No Visitors allowed types) from Ambitions, Small Parks and the Pet Store if you have the Pet Store register that came with the limited edition version of the Pets expansion pack. No more will your extremely rich or evil Sims be denied the ability to purchase these lots and own/control the entire world! Specifics Regarding Base Cost and Upgrade Requirements of Each Lot Type (These are provisional figures at this stage):

Fire Station - Has a base cost of $50,000. Upgrade Values have been fixed at the base cost (for convenience).

NOTE: Purchasing this lot will automatically make it a 3 star fully upgraded lot (assuming you use the default Ambitions Fire Station). I tried to make the upgrade requirements be adding more Fire Station Alarms (which the default Ambitions Fire Station is lacking in), but for some reason, putting FireStationAlarm, FireAlarm and Alarm in the XML file, resulted in the Fire Station being non purchasable again. I'm not sure how to fix this at this stage, so for now, i've just made it, so no upgrades are needed (assuming the Fire Station has at least one toilet and one sink on the Lot) and it automatically becomes a 3 star fully upgraded Lot upon purchase;

Salon - Has a base cost of $60,000. Upgrade Values have been fixed at the base cost (for convenience). The only necessary upgrade here to convert the default Barney's Salon and Tattoo to a level 3 lot is one Tattoo Chair to be consistent with the two Styling Stations.

Junkyard - Has a base cost of $4,000. Upgrade Value goes up to $5000 when getting it to a level 3 Lot. To get it to a level 3 Lot (assuming you're using the default Ambitions Grady's Junkstop Junkyard), a toilet and a sink must be placed on the lot (it is usually a minimum requirement before a lot becomes even a Level 1 lot) and the lot value needs to be increased by $1000, but that can be easily accounted for with the toilet, sink and surrounding wall structures and doors.

Small Park - Has a base cost of $5,000. Upgrade Values have been fixed at the base cost (for convenience). The upgrade requirements are a little bit heavier for Small Parks. To meet the minimum zoning requirements, you must place one toilet and one sink on the lot. For a level 2 Small Park, one picnic table and one outdoor grill are required. Finally, to get the Small Park to a level 3 lot, a second picnic table, outdoor grill, toilet and sink are required.

Pet Store - Has a base cost of $30,000. Upgrade Values have been fixed at the base cost (for convenience). To get it to a level 3 Lot (assuming you're using the default Graham's Pet Swap Shop Pet Store that comes with the Limited Edition version of the Pets expansion pack), all that's needed is one Salt Lick.

If you have any suggestions for more reasonable values in terms of Base Cost, upgrade values and/or upgrade requirements, let me know in the comments and if there is a majority calling for a specific change, i'll change the relevant value(s), when i've got some more time, or you could just edit the XML file yourself and change the values to your liking.

The mod was made with the latest 1.26 patch and Pets and should be compatible with all Expansion and Stuff packs, but obviously you NEED Ambitions and Pets (Limited Edition) to be able to place the lots mentioned above in the first place and be able to subsequently purchase them. If you don't have either of the aforementioned expansion packs, then all you'll get from this .package file is the ability to purchase Small Parks.

This mod edits the RealEstate XML file and will conflict with any mod that edits the same XML file.

The optional additional Combo/School stadium mod to invest in the Appaloosa Plains rabbithole edits the ComboSchoolStadium XML file and will conflict with any mod that edits the same XML file.

The optional additional Arboretum mod to invest in the Moonlight Falls/Supernatural rabbithole edits the Arboretum XML file and will conflict with any mod that edits the same XML file.

Installation
Simply drag and drop/cut & paste/copy & paste the .package file into your Mods\Packages as normal.

Additional Credits: S3PE and its developers & MTS for hosting this upload.
Other Information

***I am current not taking requests for mods for The Sims 3 at this time and will permanently shift my attention towards The Sims 4 when it releases in September 2014.***

I'm relatively new to Sims modding, only discovering it in late 2011 (very late to the party, but better late than never I suppose). I make mods to satisfy my own personal needs filling in gaps (whether they be new or updating existing mods), and then offer to release them publicly for others to use as well.

I give permission for anyone here to update the mods i've uploaded for the latest expansion packs/patches on the condition that I am inactive (i.e. not having logged on) for at least one month, I haven't stated in any capacity that I plan to update said mod either via the mod thread or in my journal, the updater states it's not their original work/is an update, and gives me credit by linking back to the original mod at the beginning of the main text description for the updated version.