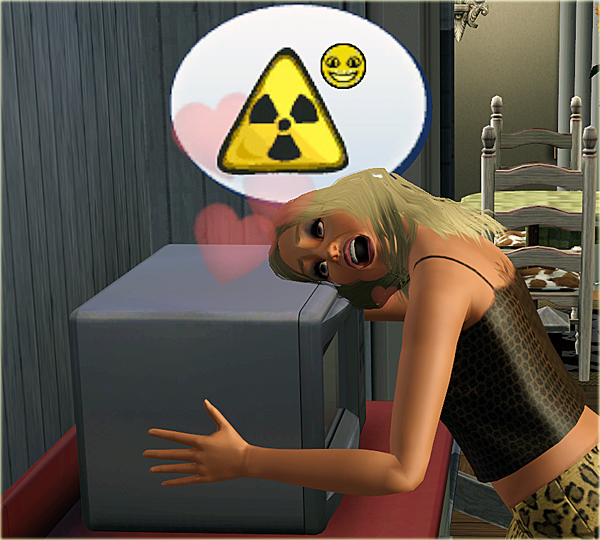 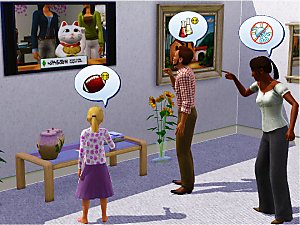 It's a good habit to always delete the 'scriptCache.package' file when you install or replace a scripted mod.
If you don't know how ---> Game Help:Sims 3 Delete Cache Files

It may work on previous Patch Levels too, but it's only been tested and proved working on 1.63 up to 1.67, so use it at your own risk.

Unlikely. This mod will hardly ever conflict with another one. However, the 'Talk To Self' and 'Change Channel' have been overriden, so another mod that somehow fiddles with those interactions, might not work as intended.

They're insane. Is that an issue?

Insane sims are insane... they love having a nice conversation with objects around the house, it makes them feel appreciated.
This mod adds a 'Converse With' interaction to TVs, Stereos, Mirrors, Fridges, Counter appliances, FishTanks and FishBowls for sims with the 'Insane' trait. (see Interactions Specifics section below)

Awww, isn't she cute? What? You think it doesn't make sense that she's interacting with a microwave, falling in love with it and emitting robotic sounds? It doesn't have to, she's insane! Gagablll blllgagaghhh!

This is an EA interaction that it's been overriden.
I added the same Stages, a Reaction Broadcaster and new balloons.
It gives Insane Sims a 'Let Off Steam' moodlet.
There is no ITUN file because the tuning is injected from the code, with alterations to match the behavior of the 'Converse With' interaction.

If you purchased the Ice Cream Maker and the Deep Fryer from the Store (or any other Counter Appliance), it will work for them too.
Insane Simbots are excluded from Counter Appliances, they will use the EA interaction instead.
Only available for Young Adults and above.
It uses the "ConverseWithAppliance" animation from the EP Ambitions.
It gives Insane Sims a 'Great Lecture' moodlet.
If interacting with the Microwave, they will also get an additional 'First Romance' moodlet. (They will get it everytime, they're insane, don't be picky)

Only available for Children and above.
If the TV / Stereo is not ON, Sims will turn it ON when they start interacting with it, then turn it OFF when they're finished only if noone else is watching/using it.
More sims can Converse with these objects at the same time. 'Ask to Join' and 'Join' are available if you click another Insane sim or if you click the interacting sim.
(After repeated tests I've come to the conclusion that 6 is the max number of sims that can converse at the same time, granted there are no obstacles around and the path is free)
It uses the "TalkToSelf" animation, typical of Insane Sims.
It gives Insane Sims a 'Let Off Steam' moodlet.
If other Insane Sims witness another Sim conversing with these objects, they will rush to join the fun (NPCs included). They'll drop whatever they're doing (unless critical) because conversing is so much fun!
The Push is an autonomous behavior so, as such, it will work only if autonomy is enabled (both in the mod and the game options).

IMPORTANT NOTES : Settings are saved separately for each save game and each world. This means that when your sims travel, settings will be different. You can still change them but remember that they will always be different from the ones you set in the Home World.
Enable/Disable Autonomy

This setting will enable/disable the autonomy for the "Converse With" interaction.

This setting will let you set the length, in Sim Minutes, of the 'Converse With' timed stage.

This mod has its own localization, this means that all strings will need to be translated into each language.

- First of all, download the 'Strings' file in the Download tab
- Extract it, open the TXT file for the language you want to translate, with Notepad (check the code in the filename)
- Replace the text you find inside all the <STR> and </STR> lines

- Do not change anything else in the file or it will become unusable
- Ignore {0.String} or {0.Number} if you see them

- Now choose 'Save As...' and give it a name containing the language code or I won't be able to identify it
- Before saving, make sure that the format is Unicode, or it will become unusable
- Last, zip the file and attach it in a post in the Comments tab